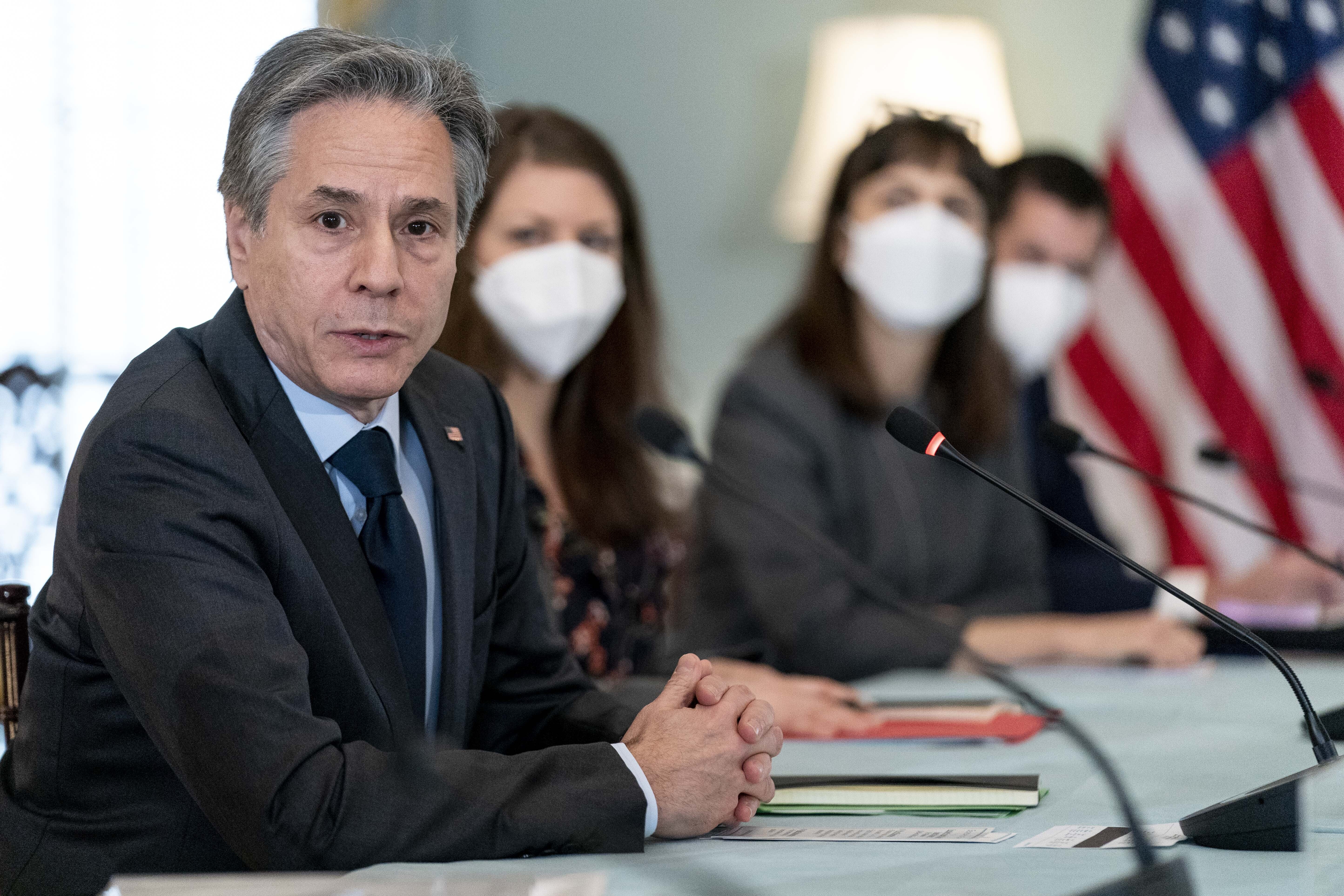 The Biden administration is resisting growing calls from U.S. lawmakers, former diplomats and others to reopen the U.S. Embassy in Kyiv, a move advocates say would send a signal of Western strength and unity to Russia as its war on Ukraine nears the two-month mark.

Multiple U.S. diplomats privately say they want an American return to the Ukrainian capital, an area from which Russian forces have withdrawn. More than a dozen European countries, including Slovenia, Italy and Spain, as well as the European Union, already have reopened their Kyiv missions or intend to do so. And Ukrainian President Volodymyr Zelenskyy has praised the governments that have returned, saying they are sending “a clear signal to the aggressor.”

But aides to President Joe Biden are still debating exactly when the United States should reopen its embassy. On the one hand, the Biden team wants U.S. diplomats to take more risks — something Secretary of State Antony Blinken laid out last year; on the other, there are legitimate concerns about their safety. It also reflects a degree of caution lingering from the deadly 2012 attack on U.S. diplomatic facilities in Benghazi, Libya, which led to multiple Republican investigations.

So far, the decision has been to hold off, a U.S. official familiar with the debate said. “It seems every agency has its share of skeptics,” the official said, speaking on condition of anonymity to describe sensitive conversations. “Half the [White House] and half of State want to do it. Other halves oppose and say too soon.”

A senior State Department official said everyone wants to reopen the embassy but camps have different standards as to when it’s safe enough to do so. A State Department spokesperson said there was no time table to announce, but “our team is actively planning, and we very much look forward to resuming embassy operations in Ukraine.” A second State Department official who asked to remain anonymous as they were not authorized to speak on the matter said that there were no advance preparations underway, however, to immediately reopen the Kyiv facility.

The discussion is ongoing as Russia has pulled its troops away from the Kyiv area and is concentrating its attacks on Ukraine’s east, giving the capital some room to breathe. But Moscow can be unpredictable. On Friday, Russian missiles struck a factory on the outskirts of Kyiv that it claimed had produced the Ukrainian missiles that hit Russia’s flagship cruiser, the Moskva, and caused it to sink in the Black Sea.

On Monday, it launched missiles at Lviv, a city in Ukraine’s west where U.S. diplomats had, in an earlier phase, temporarily relocated from Kyiv. At least seven people died.

Nonetheless, several U.S. lawmakers from both parties have called on Biden to send American diplomats back to the Ukrainian capital.

“U.S. embassies have operated in similar environments before, and a renewed U.S. presence in Kyiv is vital to efforts to assist the Ukrainians,” Sen. Jim Risch of Idaho, the ranking Republican on the Senate Foreign Relations Committee, said in a statement. Risch also urged Biden to officially nominate an ambassador to Ukraine, a post that has sat empty for years due to a variety of reasons.

Rep. Tom Malinowski (D-N.J.) argued that the embassy should reopen because Kyiv is “the moral capital of the world and the locus of the most important American foreign policy enterprise in years.”

And William Taylor, a former U.S. ambassador to Ukraine, said a number of American diplomats assigned to Ukraine have told him they are eager to return to Kyiv. It’s not just symbolism; U.S. diplomats believe they can do their jobs better in the capital, where they have more access to Ukrainians of all backgrounds, including government officials.

“They listen to, get messages from, hear what the Ukrainians are thinking,” Taylor said, noting that such exchanges go both ways. “You can’t do that from any place other than Kyiv.”

That’s an argument echoed by Sen. Jim Inhofe (R-Okla.), who pointed out that the Biden team “has not even suggested it will return its diplomats to anywhere in the country.”

“U.S. officials returning to Ukraine would improve our ability to coordinate with security forces and various contributing nations so we can collectively sustain Ukraine’s successes on the battlefield,” Inhofe said in a statement.

The administration’s reluctance to resume diplomatic activity in Kyiv is surprising given what Blinken and other top Biden aides have advocated in recent years.

In an October speech about modernizing the State Department, Blinken laid out the concerns he’d heard from many U.S. diplomats about how security requirements made it harder for them to do their jobs. The diplomats bemoaned, among other things, how long it took to establish new diplomatic facilities, and how embassies were often built in areas far from important centers, making it tough to schedule meetings. Blinken pledged to reduce such barriers.

“A world of zero risk is not a world in which American diplomacy can deliver,” Blinken said in that speech. “We have to accept risk and manage it smartly.”

On Tuesday, Deputy Secretary of State for Management Brian McKeon emailed the department to encourage staffers to submit examples of innovative and smart risk taking in their diplomatic work. The email also directed staffers to a newly updated policy on risk management, arguing that it was time to shift away from the post-Benghazi mindset.

“The Secretary, senior leaders, and I stand behind you as you make considered decisions regarding risk,” McKeon wrote in the email obtained by POLITICO. The note did not mention Ukraine.

Some U.S. lawmakers also have introduced legislation designed to incentivize U.S. diplomats to leave behind what many call a “bunker mentality.” Such moves come amid growing concerns in Washington about China’s rising diplomatic influence around the world.

But while diplomats of other countries often have an easy time getting around in a host nation, the reality is that U.S. diplomats have a bigger target on their back because of America’s global standing.

The Biden administration closed the embassy in Kyiv in mid-February after months of warning Ukraine and other countries that Russian leader Vladimir Putin had built up his forces in a likely plan to invade.

The embassy drawdown occurred in stages over several weeks, with voluntary and ordered departures of diplomats and their families and the relocations of some core staff, first to Lviv, later to neighboring Poland. The departures irked Ukrainian officials as they appeared more skeptical that Putin would invade and were trying to keep their country politically stable.

The U.S. Embassy in Ukraine is one of several American outposts that is closed, operating at a reduced capacity or whose diplomats are based elsewhere.

The U.S. Embassy in Kabul shuttered last year as Afghanistan’s government fell to the Taliban Islamist militia. Some U.S. diplomats assigned to Afghanistan now operate out of Doha, Qatar. It’s unclear when U.S. diplomats will return to Kabul, especially given that the United States has not formally recognized the Taliban government.

In Iraq, the U.S. Embassy in Baghdad is still open, despite security risks. That embassy, however, is located in the Iraqi capital’s heavily fortified Green Zone, and it is a massive compound built with security as a top priority.

The United States dramatically reduced its activities at its embassy in Cuba in recent years, in part due to the still-unsolved cases of illnesses known as “Havana syndrome.” The Biden administration has promised it would soon resume some visa processing and expand other functions at the embassy.

Some Libyan leaders have urged the United States to reopen its embassy in Tripoli, saying that would send a signal to the world that Libya is moving beyond the chaos that has consumed it over much of the past decade. Despite studying the idea, however, the Biden administration has yet to reopen that mission, and many U.S. diplomats focused on Libya operate from Tunisia.

The Libyan case is a sore point because of the 2012 attack in Benghazi, which killed four Americans, including U.S. Ambassador to Libya Chris Stevens. The politically polarized debate in Washington over what happened badly jarred the State Department, and the fallout is often blamed for the agency’s overly protective attitude toward its diplomats.

“The overwhelming majority of Foreign Service officers are willing to accept the physical risks of being where the action is,” said Malinowski, who served as a top State Department official. “The problem has been that ever since the post-Benghazi congressional witch hunt, successive administrations have been wary of the political risks.”

The war in Ukraine also led to the closure of the U.S. Embassy in Belarus, whose dictator, Alexander Lukashenko, has sided with Putin. State Department officials said they have no update on the status of that diplomatic mission. The U.S. Embassy in Moscow, however, continues to operate, though with a reduced capacity.

Capitol Hill staffers are studying the Kyiv embassy issue, with some noting that there are various configurations possible for a “reopening.” It doesn’t have to require a full restaffing, after all; a handful of U.S. diplomats could arrive and unlock the embassy doors in a first phase.

“The question is really ‘How best can the U.S. reestablish a diplomatic presence and protect personnel from harm?’” a Senate aide said.

There also are some big questions to consider. Would putting Marines — who guard U.S. embassies — back inside the country violate Biden’s promise that no troops will be on the ground? And if, for example, the Russian military strikes the U.S. Embassy, does that count as an attack on America that would trigger the mutual defense clause of the NATO military alliance?

That could depend on a number of factors, according to national security lawyers, including whether the attack was deliberate, whether it would meet the threshold of an “armed attack” under the United Nations Charter, and, ultimately, how the United States and NATO as a whole decide to respond to it.

The pressure on the Biden administration to reopen the embassy in Kyiv is likely to grow if the Ukrainian military continues to hold off its Russian foes in the weeks and months ahead.

At the moment, the administration also is considering whether to send a top official, such as Blinken or Defense Secretary Lloyd Austin, to visit Kyiv. Other national leaders, including British Prime Minister Boris Johnson, have recently visited the Ukrainian capital.

The administration has, however, ruled out sending Biden himself

“That is not in the plans for the president of the United States,” White House press secretary Jen Psaki said of the idea. “We should all be maybe relieved about that.”

“You’re welcome, America,” she added. “We need him to do a lot of things.”