Biden’s been consumed by Ukraine. His team wants to bring the focus back home. 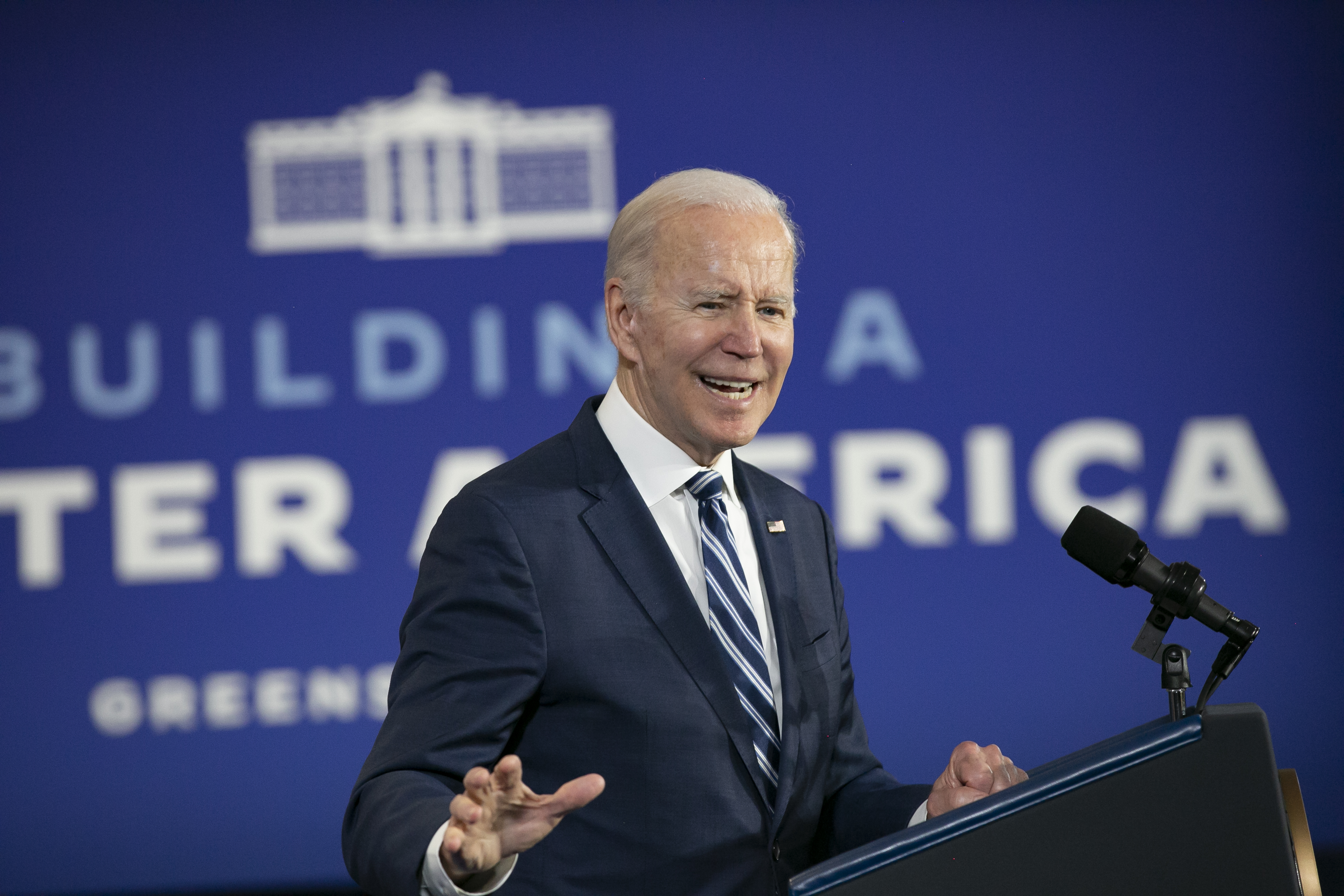 The rest of the world might not allow it. But Joe Biden wants to return his focus to matters happening at home.

With the war in Ukraine entering its second month and continuing to dominate global headlines, White House allies are expressing concern that voters may see the president as more consumed by international affairs than domestic ones.

The White House itself is keenly aware that voters’ perceptions about the economy are still likely to determine the outcome of November’s midterm elections. And as they warily watch the president’s poor poll numbers, two senior administration officials said a concerted effort is being launched to reemphasize to Americans that the president understands their pain and is trying to help.

In the coming weeks, Biden will travel more inside the country and further stress that Russia’s invasion isn’t some far-off crisis but one with deep economic ramifications in the United States.

“Voters, as sympathetic as they are to Ukraine, are getting a little fatigued,” said Celinda Lake, a veteran Democratic pollster. “And they’re wondering: We’re spending all this money abroad, but what are we spending here at home?”

Lake said it was imperative that the president spend the seven months remaining before the midterms explaining his record and promising to do more. “Half of voters,” she suggested, still don’t know what Biden has accomplished to date.

The scope of Biden’s presidency will be impacted by Democrats’ ability to keep control of at least one, if not both, chambers of Congress this November. And the White House knows it needs to both hammer home Biden’s accomplishments and show Americans it is trying to do more, even at the margins.

The war in Europe will continue to dominate Biden’s time, but aides do not want it to occupy all of his attention. In fact, some of Biden’s advisers believe they only need to look across the Atlantic to find a warning sign of a president perceived to be focused too much on global diplomacy and not enough on domestic pocketbook issues. Many French voters believe that French President Emmanuel Macron prioritized trying to negotiate with Russian President Vladimir Putin and that he neglected domestic issues, leading to tight poll numbers heading into the presidential runoff election later this month.

As it looks to refocus on domestic issues, the White House is eyeing faster, tangible actions to tackle kitchen table issues, namely inflation. This month, Biden issued executive orders allowing the use of an ethanol blend this summer to lower gas prices and to jumpstart a new regulation fixing the Affordable Care Act’s so-called family glitch, which would lower health insurance costs for millions. And late last week, the administration announced plans to resume the sale of leases for oil and gas drilling on federal lands.

Having gone overseas to address the conflict in Ukraine, Biden, for the first time in weeks, boarded Air Force One to promote the steps he’s taken to battle inflation and the economic impact of that war. Last week, he traveled to Iowa to promote an effort to lower gas prices and North Carolina to tout measures to ease supply chain bottlenecks.

He also unveiled a finalized regulation to curb the rise in gun violence across the country, an event that came roughly a week after a mass shooting in Sacramento, Calif., and one day before a man opened fire on a Brooklyn subway, injuring 10. This week, Biden will hit the road again, visiting New Hampshire, Oregon and Washington to highlight new infrastructure projects and cost-saving efforts for families.

He’s also expected to unveil a police reform executive action and take another shot at passing a revamped version of his Build Back Better proposal aimed at combating climate change and cutting health care costs.

Aides want Biden to hit the road to both pitch these ideas and show that he is empathizing with Americans’ struggles. But his tools to actually deal with rising gas and food prices are somewhat limited. And on several other initiatives — including gun control, citizenship for immigrants brought to the U.S. as children, and voting rights — there seems to be no legislative path forward due to Republican opposition and Democratic resistance to change the legislative filibuster.

The re-emphasis on domestic affairs comes against a sobering backdrop for Biden: His job approval ratings are bad and not improving. The president has received high marks from foreign policy experts, fellow world leaders and even some Republicans for his handling of the war in Europe, and unemployment is at its lowest level in more than 50 years. But inflation, though a global trend, has soured Americans’ views of the economy and his handling of it.

Biden’s poll numbers with critical Democratic base voters are particularly worrisome for party officials. Last month, a Marist poll found only 34 percent of Gen Z and millennial voters approved of Biden’s job performance, and a Marquette Law School poll found that the percent of Black voters who approve of Biden’s handling of the presidency had dropped by 12 points since November.

“A segment of the Democratic base blames Biden for Republican recalcitrance,” said Rep. Emanuel Cleaver (D-Mo.). Black voters have criticized Biden for an inability to pass voting rights legislation, he said. “It has nothing to do with Biden’s interest in and willingness to fight for the Voting Rights Act.” Cleaver surmised that Biden “probably had more meetings with Sen. [Joe] Manchin” — the Democratic senator most prominently standing in the way of filibuster reform — “than he has with the first lady.”

Passing a smaller version of Biden’s Build Back Better plan would be a huge lift, said Cleaver. But selling what Democrats have already passed is equally imperative.

“I wish we could put up signs all over the country: ‘Pardon our progress, we’re rebuilding the nation,’” said Cleaver, referring to money going to states to fix crumbling bridges, waterways and broadband. “Most Democrats would like for the president to be out in the nation more, but hopefully, most Democrats like me, are also fully aware of the fact that we have a crisis in Eastern Europe.”

Ultimately, Democratic lawmakers and pollsters believe the party’s midterm fortunes will rise and fall on voters’ views of their handling of the economy. More travel by Biden to key swing states is necessary, said Lake, who conducts regular focus groups with Democratic and inconsistent midterm voters. She advised that Biden retell stories he shared on the campaign trail about his dad’s unemployment forcing his family to move. That message “gets lost when you’re relying on messaging from economic statistics, and economic studies and data,” she added.

But previous efforts for Biden to hit the road to promote his economic agenda were scuttled by the need to respond to outside forces. And the current portfolio is also likely to be largely reactive, with aides anticipating a sharp rise in Covid cases and an increase in migrants at the southern border.

“While rallying the world against Vladimir Putin’s appalling invasion of Ukraine and inflicting unprecedented costs on Russia, the president has also taken further action on his economic agenda for the American middle class,” said White House spokesperson Andrew Bates. “The president also continues to work with a wide range of lawmakers on a reconciliation plan that would cut the costs of prescription drugs, energy, and childcare while lowering the deficit even more and fighting inflation for the long haul, as well as a landmark bill to strengthen our competitiveness with regard to China.”

If Democrats are unable to pass the rest of Biden’s economic proposals before November, their best — perhaps only — shot at maintaining some power in Congress is to reset the focus domestically and to convince voters that they helped the economy recover as the nation emerged from the worst of the pandemic.

“Democrats have one overriding political communications priority now — we have to convince voters that things are better because of our time in power,” said Simon Rosenberg, a longtime Democratic operative, who is advising campaigns and party committees to ramp up now. “If people come to believe by this summer that things are better, we will be competitive this fall. If they don’t, we won’t.”