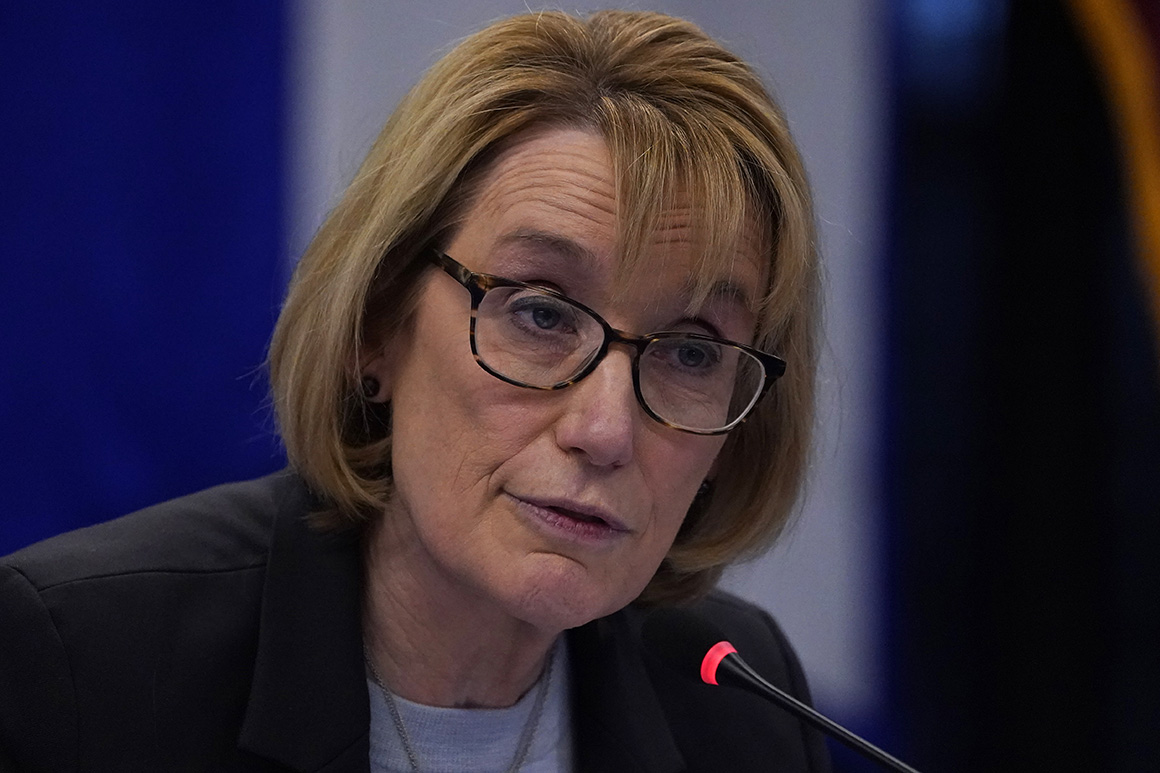 Her home state shares a border with Canada. So when New Hampshire Sen. Maggie Hassan recently showed up more than 2,000 miles away, at the U.S border with Mexico, it created a backlash.

Not just among Republicans — who mocked her as ‘MAGA Maggie’ and dismissed her appearances in Texas and Arizona as a desperate attempt to appear tough on border security — but within her own party. Latino leaders reacted with rage to her southern border visit in early April and her opposition to the Biden administration’s plan to lift the Trump-era border restriction known as Title 42.

Members of the New Hampshire Democratic Latino Caucus resigned from their party leadership posts in an angry public letter. A Democratic state lawmaker took to the House floor to rail against Hassan and Rep. Chris Pappas (D-N.H.), who also opposes the administration’s effort to end Title 42. More than a dozen progressives and immigration advocates gathered in Portsmouth Tuesday — the same day President Joe Biden was visiting the city — to protest Hassan’s stance and demand that she meet with them.

The fierce pushback is a glimpse into the volatile politics surrounding Title 42 and the pressures buffeting vulnerable swing-state senators like Hassan — one of four Democratic incumbents whose fate in November will likely determine control of the Senate.

“I’m really furious. I don’t see what she thought she was going to gain by doing this,” said Eva Castillo, one of the signers of the letter and director of the New Hampshire Alliance for Immigrants and Refugees. “I really think she’s trying to pander to the right and she thought doing this is going to help her win some more support.”

“In the last election, she was vulnerable and she’s even more vulnerable now. So, if we all decided to just leave it blank, that would speak very loudly,” she said.

Hassan isn’t alone in criticizing the Biden administration over plans to lift Title 42. A number of House and Senate Democrats — including Sens. Mark Kelly of Arizona, Raphael Warnock of Georgia, and Catherine Cortez Masto of Nevada, the four most endangered Senate Democrats — have called on the administration to delay the rescission of the policy, which allows border agents to quickly kick out thousands of migrants without letting them seek asylum.

Yet Hassan is the only one of the group — except for Kelly, who represents a border state — to visit the border to emphasize the need for border security.

“She’s back in election mode, so she’s going to out-Republican the Republicans on the border. Is she disappointing? Absolutely,” said Arnie Arnesen, a former Democratic gubernatorial candidate and liberal radio talk show host. “I don’t think she’ll get one more vote for what she’s doing… I think it’s foolish, but we will be voting for Maggie, not because of Maggie but because we believe in democracy and she won’t vote for Mitch McConnell.”

Immigration isn’t necessarily a top-of-mind issue in New Hampshire, according to several Democratic strategists and leaders. Andrew Smith, director of the University of New Hampshire Survey Center, said there isn’t any recent polling on immigration views in the state, but that the public’s view on Title 42 right now is “not likely to impact many votes in November.”

Still, Hassan’s reelection is taking place against the backdrop of an anxious mood in the state. Nearly two-thirds of respondents in a recent UNH Granite State Poll believe the U.S. is on the wrong track; only 28 percent think it’s headed in the right direction. Biden’s approval ratings are underwater: 47 percent approve of his job performance, while 53 percent disapprove.

A Granite State Poll released this week puts Hassan in a statistical tie in match-ups with four potential Republican challengers. Just 35 percent have a favorable opinion of her, compared to 51 percent who view her unfavorably.

Arnesen and other Democrats in the state noted that Hassan has upset members of her own party before with her position on immigration. In 2015, as governor, she became the first Democratic governor to call for a complete halt to the U.S. accepting Syrian refugees until the government could “ensure robust refugee screening.”

But Hassan’s precarious position this year has led many to assume her trip — and a subsequent video she shared to Twitter in front of the border wall — was a blatant political ploy. To some Democrats, it appeared to be an embrace of GOP tactics and an unnecessary doubling down on an issue that Republicans are going to criticize her on regardless of what she says or does.

“I’m not aware of anyone who thought that was a terribly good idea. It seems like the breakdown of Democrats is: Some are upset, others are perplexed — and I’m not sure anyone is happy about it,” said one long-time New Hampshire-based Democratic political insider, who spoke on condition of anonymity to speak freely. “I love Maggie… but I don’t think anyone really understands why she did it.”

Hassan’s moves have also led to a fallout with Latino leaders in the state.

“The dangerous rhetoric and its accompanying attitude is something we expect from the New Hampshire Republican Party and their fear-mongering slew of candidates,” they wrote in their public letter to the state party chair, “but when one of our Democratic leaders acts in the same way, we must draw a line.”

Hassan’s allies expect her stance on immigration — and willingness to speak up against the Biden administration — will play well with moderate and independent voters. That’s no small consideration in a state where independents represent the largest group of registered voters.

A recent Gallup poll also found that independents are becoming increasingly concerned about illegal immigration, with 39 percent concerned a great deal about it.

“Maggie is trying to figure out the right path to do this and it doesn’t necessarily mean falling into lock step with the administration. That’s who she is. She does her homework,” said Sylvia Larsen, a former Democratic state Senate president who was in office for 20 years. “We have, as every state [does], a left wing of the Democratic Party that is more vocal about these issues but in terms of walking the line… people will go along with this effort to make sure there’s security, make sure there’s adequate health safeguards.” 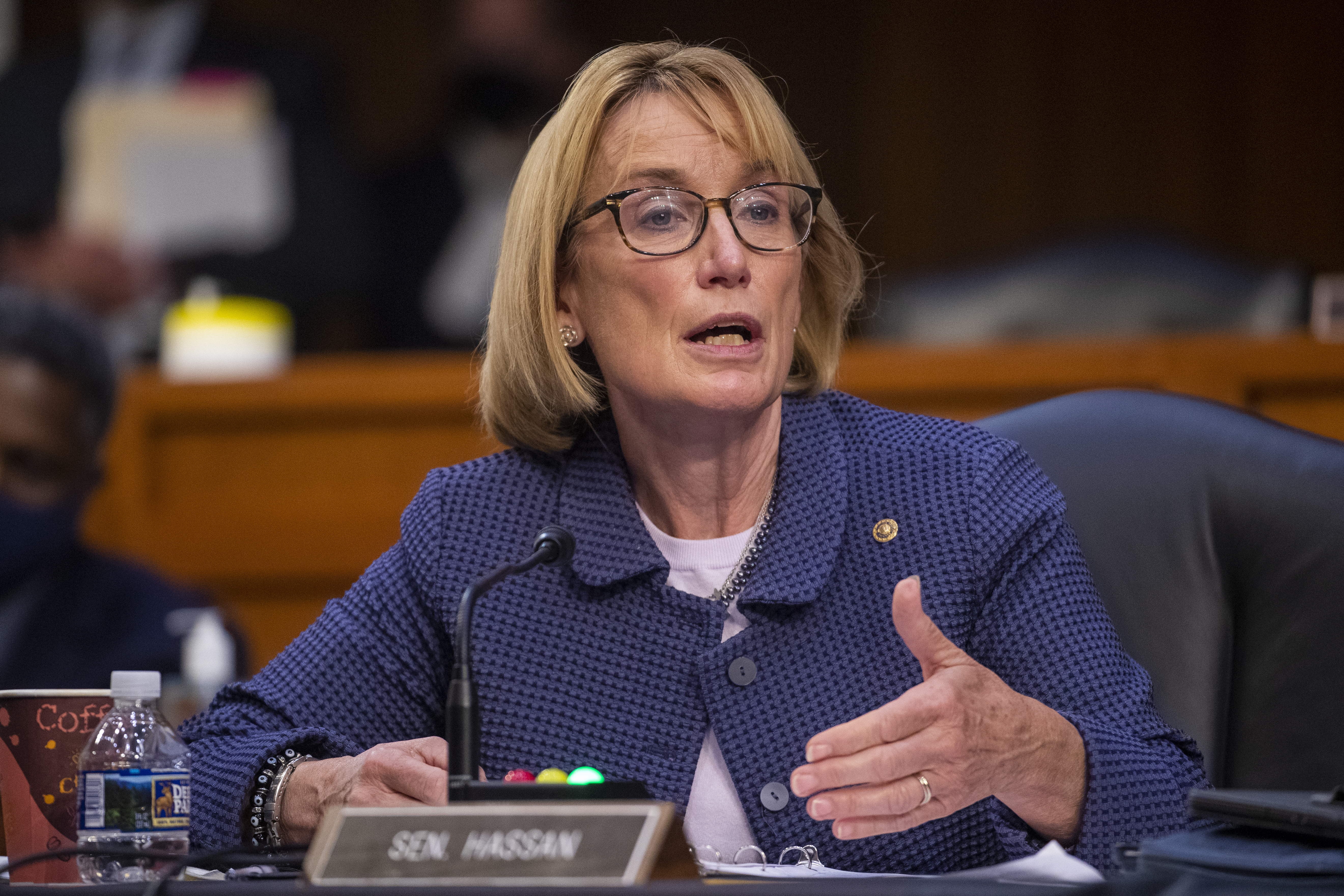 Hassan’s office would not comment on the criticism she has received for her position on Title 42 and recent border trip. But a spokesperson for Hassan explained that on the trip, which was her third to the southern border, the senator heard from law enforcement about the urgent need for additional resources — including personnel, technology and physical barriers — needed to address an expected increase in border crossings.

“As a member of the Homeland Security Committee, Senator Hassan will continue to push the Biden Administration not to end Title 42 until it has provided a comprehensive plan to ensure a safe, secure, and humane border,” Laura Epstein, spokesperson for Hassan, said in a statement.

Republicans have shown every intention of pressing Hassan on the issue. For months, her GOP opponents have been criticizing her on immigration. They’ve continued to slam her in the weeks following her border trip, dismissing it as a photo-op, and a sign she recognizes her vulnerability.

Kevin Smith, another Republican Senate candidate and former town manager of Londonderry, N.H., has repeatedly railed against Hassan on the border issue — and after his own border visit in February, challenged her to do the same.

Many Democrats familiar with Hassan’s electoral history — she won two terms as governor before narrowly knocking off GOP Sen. Kelly Ayotte to capture the seat in 2016 — argued that she’s still well positioned to win a second term and that immigration is unlikely to be a determinative issue in November.

“Maggie tends to be a moderate kind of practical person, so she may lose some of the left wing of our party on this issue but they also know she stood up on so many other issues,” Larsen said. “I think overall she’ll come out OK with this decision.”