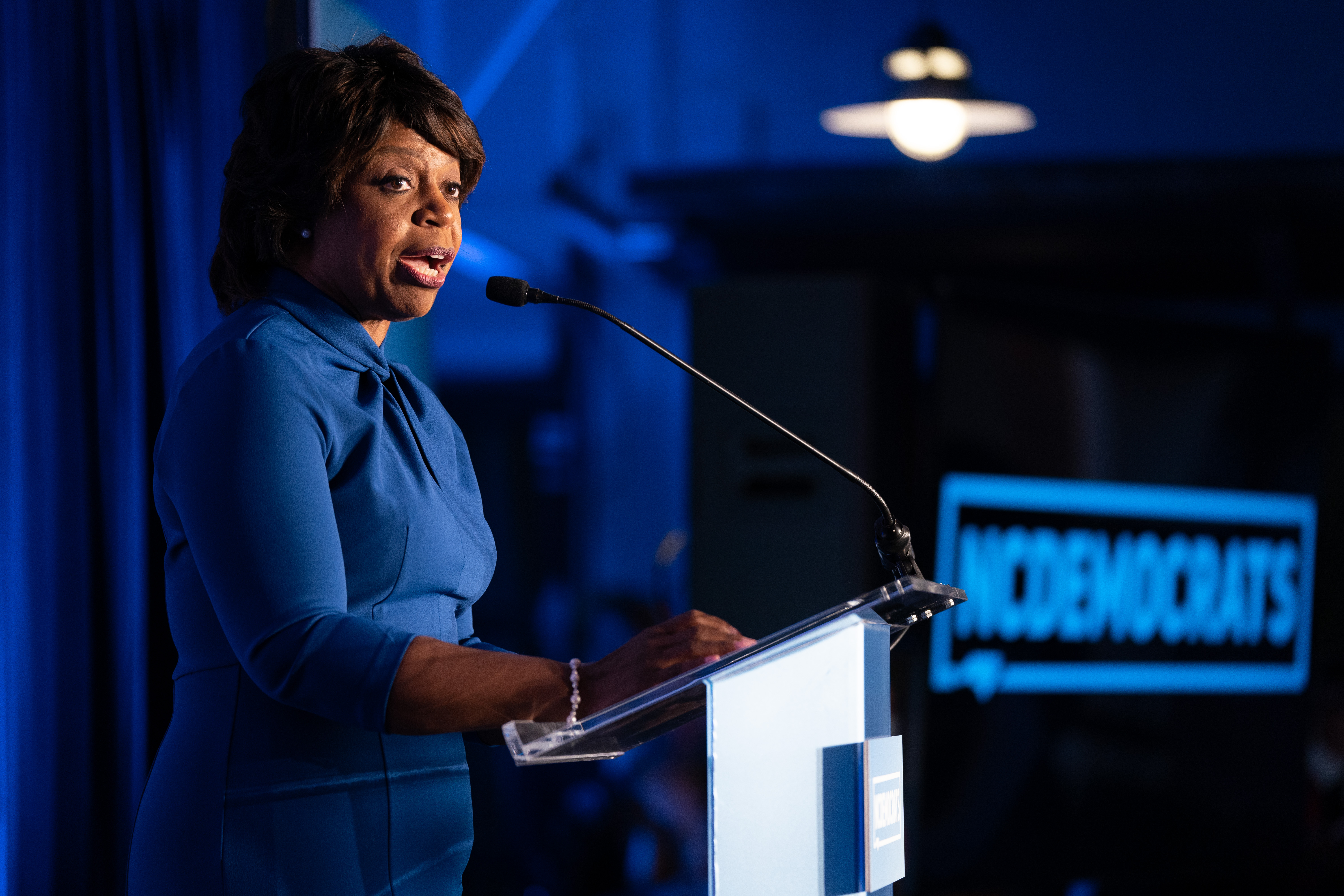 Senate Democrats are contemplating just how hard to go after their White Whale: A Senate seat in North Carolina.

Gov. Roy Cooper, the state’s most successful Democrat, is pushing for the party to go all in, despite them losing the last four North Carolina Senate races. He predicted President Joe Biden’s rating will improve enough to give Beasley, a Black woman who won a statewide race in 2014 and only narrowly lost in 2020, a fighting chance.

“I know what it takes to win in North Carolina and Cheri Beasley can do it. With everything on the line this year, we need to leave it all on the field for her from the national party on down to the local level,” Cooper said in an interview on Thursday. 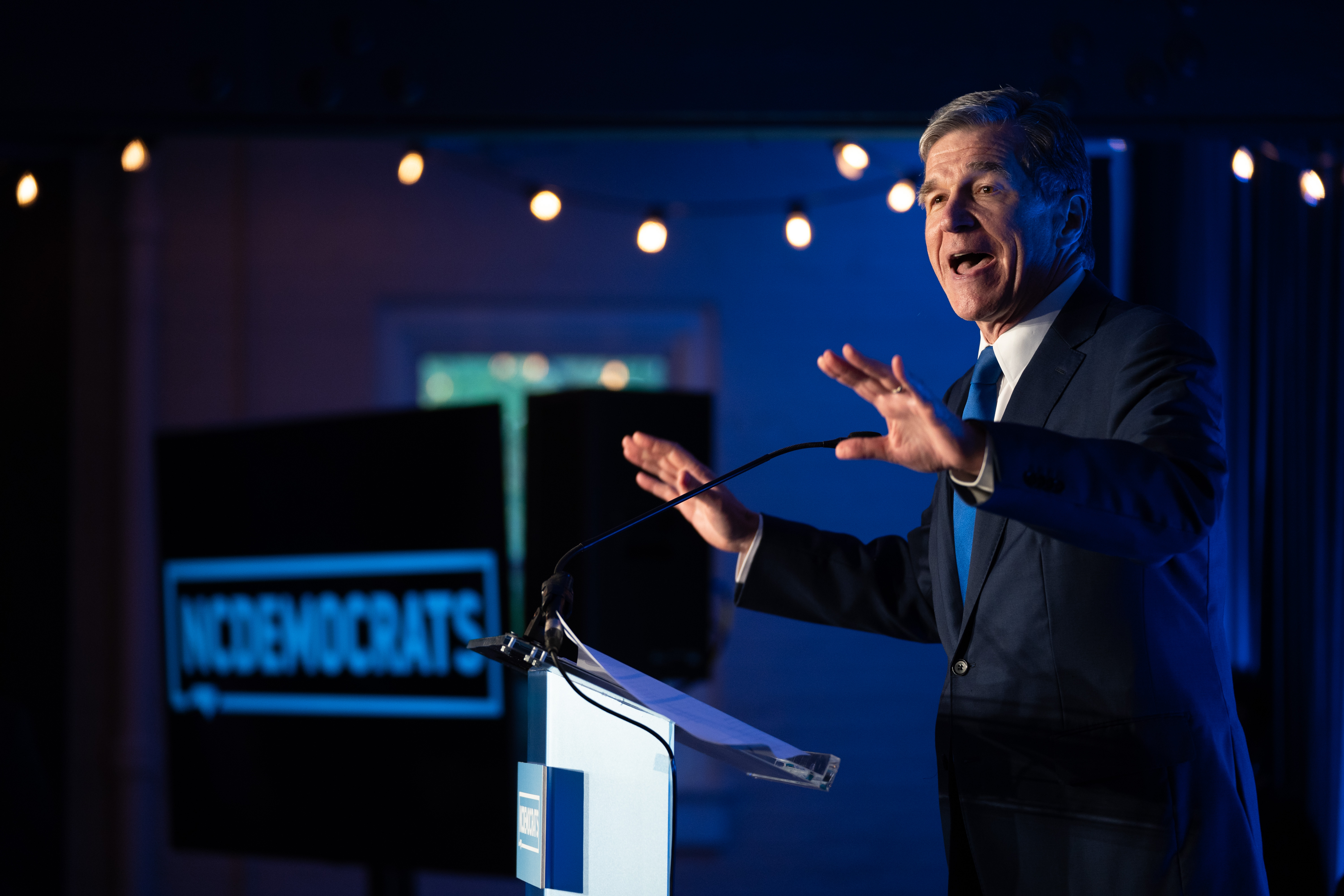 The Democratic Senatorial Campaign Committee and the Chuck Schumer-aligned Senate Majority PAC combined to spend $60 million in 2020, when a sex scandal brought down Cal Cunningham’s once promising campaign to take down Republican Sen. Thom Tillis. At the moment, neither group has reserved any money for the fall campaign, though Cooper said he believes those groups “will be there when it counts.” A spokesperson for Senate Majority PAC said the group plans to begin running ads next week.

The National Republican Senatorial Committee and Senate Leadership Fund have plans to spend nearly $30 million in the race already, with the NRSC already running ads attacking Beasley as soft on crime. Without major outside help, the spending disparity would be a struggle for Beasley to overcome no matter how promising a candidate she is. And Democrats still may make a big commitment there this fall to take the seat of retiring Sen. Richard Burr (R-N.C.).

In an interview, DSCC Chair Gary Peters (D-Mich.) said GOP Rep. Ted Budd’s nomination makes Beasley more viable as a candidate, though he was circumspect on whether the national party will jump in with both feet. He said Democrats need to “see how it plays out.”

“We’re going to be watching it closely, and they may very well see some investments” in North Carolina, Peters said, calling Beasley “strong” and predicting she’d only get better as a candidate. “My No. 1 priority is to reelect incumbents. So that’s always our priority. But we do believe that we have some real great opportunities to go on offense.”

Senate Democrats’ path to keeping their majority relies mainly on protecting four incumbents in close races. And they are already committing money to Pennsylvania and Wisconsin, both GOP-held seats in states that Biden won and which have been more fertile ground for Democrats in recent years than North Carolina.

Many of the battleground states have competitive gubernatorial races, so Democrats say they have more time to decide whether to spend in North Carolina before advertising rates skyrocket.

Yet there’s also a stark political reality for Democrats: Recently, they’ve won more Senate races in deep red states like Indiana, Alabama and West Virginia than they have in North Carolina. What’s more, races in the state can quickly get out of hand and become wildly expensive.

In 2010, Burr easily won reelection during the tea party wave. In 2014, Tillis narrowly ousted Hagan in a terrible political environment for Democrats. In 2016, former President Donald Trump carried Burr to a third term. And Democrats thought they were on the cusp of victory in 2020 before Cunningham collapsed over an extramarital affair.

Sen. Catherine Cortez Masto (D-Nev.), the DSCC chair in 2020, said she tried to recruit Beasley for that 2020 race against Tillis. Asked if Beasley would have won where Cunningham did not, she replied: “Woulda coulda shoulda.”

“She’s going to bring out a lot of voters that may not have come to the polls before at a time when we need them,” said Cooper, who won gubernatorial elections in 2016 and 2020. “Those who may tend to vote Republican will look to Cheri Beasley as an acceptable alternative to the ultra-right wing, which Ted Budd obviously represents.”

Large super PACs and party committees often change up spending strategies as the election nears, and both Senate Majority PAC and the DSCC could easily decide to put more resources into the state. With a presidential race and Cooper’s reelection on the ballot in 2020, the DSCC reserved $11.7 million and Senate Majority PAC reserved $25.6 million in initial ads that year in their effort to defeat Tillis.

Veronica Yoo, a spokesperson for Senate Majority PAC, said “Democrats are united behind an incredibly talented candidate” and that Beasley will have “the resource advantage to compete and share her story.” A DSCC aide said the party’s initial bookings that left out North Carolina “secure the most affordable advertising rates in certain states — additional states and funding could be added as the cycle continues.”

Former DSCC Chair Patty Murray (D-Wash.) had some plain advice for her party in North Carolina: “I won’t make decisions for the DSCC, but that’s definitely a state I’d look at.”

While Democrats could conceivably lose North Carolina and still hold the majority, it’s a vital seat for Republicans in a 50-50 Senate battle. And they say Democrats’ lack of planned investment suggests the party isn’t convinced it can compete.

Jonathan Felts, a spokesperson for Budd, said that “given their lack of initial investment, it’s obvious national Democrats are still not convinced the Beasley candidacy is viable or her campaign team is up to the job.”

“It illustrates how badly the political environment has deteriorated for Democrats that a state costing over $200 million in 2020 hasn’t attracted a single Democratic dollar so far,” said Jack Pandol, a spokesperson for Senate Leadership Fund, which has reserved more than $20 million in North Carolina ads this year.

Even so, Republicans are gearing up for a potentially tough slog. Burr said that Budd is not as strong in a general election as former Gov. Pat McCrory (R-N.C.), who lost badly to Budd in this month’s primary: “The polling says that, that’s not a personal assessment of mine, because I like Ted. But you’ve got to remember on the other side of a primary election there’s always an opponent.”

Early polls show the North Carolina Senate race will be competitive, and the DSCC included North Carolina in its $30 million field organizing programs. Travis Brimm, Beasley’s campaign manager, said North Carolina is competitive and “national Republicans know it, or they wouldn’t have started spending millions before the GOP primary even wrapped up, to try to keep this seat.”

Ultimately, Tillis expects that Democrats will end up spending tens of millions of dollars in North Carolina. In part, that’s because turning the state into a battleground would help Democrats divert the GOP’s focus from incumbent-held seats in New Hampshire, Nevada, Arizona and Georgia that will ultimately determine who controls the majority.

Not that he thinks it’s a good use of money.

“My expectation is it’ll end up being in the top-three most expensive races. So it’s coming,” Tillis said. “In this environment they’ve got their work cut out for them.”