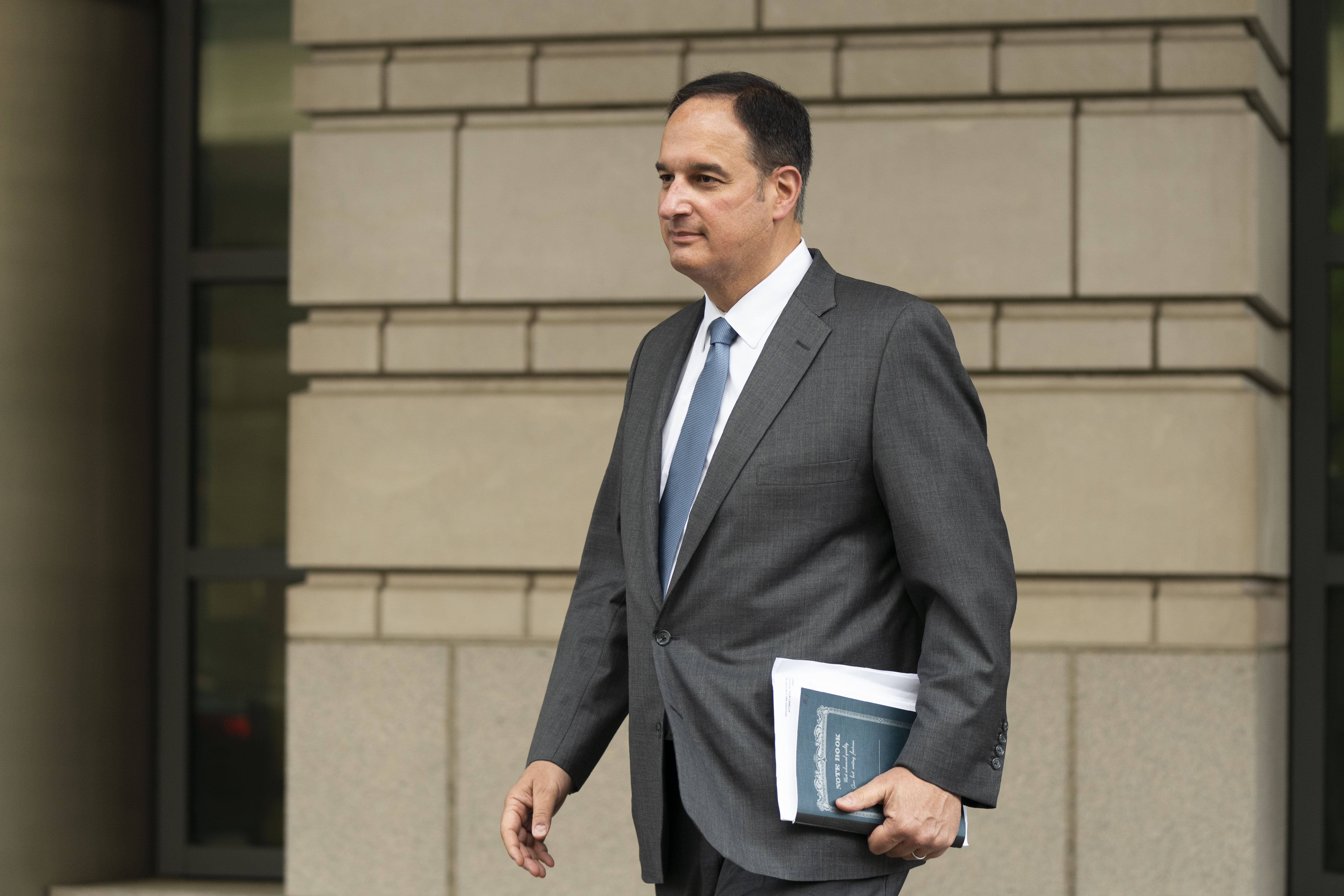 An FBI agent involved in the investigation of links between Donald Trump and Russia told a colleague weeks before the 2016 election that top FBI brass were “fired up” about since-discredited allegations of a secret communications channel between Trump and a Russian bank with close ties to Vladimir Putin.

“People on 7th floor to include Director are fired up about this server,” FBI agent Joseph Pientka wrote in an internal instant message to another agent working on the issue, Curtis Heide, on Sept. 21, 2016. “Reachout and put tools on… its [sic] not an option — we must do it.”

But Pientka’s comment, revealed in courtroom testimony Monday, was part of a conflicting narrative presented to jurors about the secrecy and urgency with which the FBI treated allegations related to the Putin-linked Alfa Bank. Those claims arrived at the bureau via Michael Sussmann, a cybersecurity attorney who represented the Democratic National Committee and the Hillary Clinton campaign, in the final weeks of the 2016 contest.

Special Counsel John Durham has charged Sussmann with falsely telling the bureau he had brought the Alfa Bank tip in his personal capacity, not on behalf of any of his clients — potentially affecting the FBI’s handling of the tip. But Sussmann’s defense team has emphasized that the bureau was well aware of Sussmann’s ties to the Democratic Party and that the circumstances of the tip were irrelevant to FBI’s decision to pursue it and ultimately deem it unsubstantiated.

The ongoing trial is the first courtroom test of Durham’s long-running investigation into the origins of the FBI’s Trump-Russia investigation, and he’s used the Sussmann prosecution to publicly disclose a broad swath of his case. Sussmann’s team, though, has cast doubt on the allegations, describing them as a desperate effort to shoehorn salacious and misleading evidence into the public record.

Despite Pientka’s messages, other witnesses described the bureau’s reaction to the Alfa Bank tip as relatively modest — a limited offshoot of a much broader and more urgent investigation of Russia’s interference in the 2016 election, and any evidence of the Trump campaign’s involvement.

Indeed, current and former FBI witnesses seemed to have hazy memories of aspects of the Alfa Bank episode and indicated their recollections were heavily influenced by notes, emails and messages they exchanged at the time, which have been unearthed by Durham’s team.

Bill Priestap, who led the FBI’s counterintelligence division in 2016, said he recalled regular briefings about the broader Trump-Russia investigation, known as Crossfire Hurricane, but that he didn’t recall similar briefings on Alfa Bank.

“It was not something I was regularly briefed on and if I recall correctly, at the end of the day, it didn’t amount to much,” said Priestap, who is now retired from the law enforcement agency. “It fizzled out.”

Asked about Pientka’s assessment that the leadership was “fired up,” Priestap said he didn’t recall that reaction from FBI leadership or from FBI Director James Comey, specifically.

Perhaps more significantly, the description of the FBI’s handling of the Alfa Bank tip allowed Sussmann’s attorneys to remind the jury about the significant alarm within the bureau about connections between the Trump campaign and Russia, which were the subject of FBI and special counsel investigations for nearly three years.

“As of 1998, Putin was on Alfa Bank’s payroll,” the report said, in addition to detailing other alleged links between the bank, its owners and Putin.

Witnesses at Sussmann’s trial continued to provide murky accounts of how FBI personnel were told to handle the issue of the DNC-connected cybersecurity lawyer when pursuing the allegations he had relayed.

Agent Ryan Gaynor said he was told that Sussmann’s identity was considered “close-hold” but he did not recall being told why.

“If I was given any reason at the time, I do not remember what that was,” Gaynor said.

Gaynor became the focal point of the Sussmann defense team’s effort Monday to poke holes in the prosecution’s case.

Gaynor provided two important pieces of evidence for prosecutors: claiming the existence of the “close hold” — which he says prevented him from sharing Sussmann’s identity with the Chicago-based agents leading the investigation — and testifying that if he had been aware of Sussmann’s potential motivations for lodging the allegations, he wouldn’t have devoted his attentions to the case, diverting from other matters.

But Sussmann’s attorney Michael Bosworth hammered away at Gaynor’s credibility, noting that the FBI agent’s story shifted throughout multiple interviews with Durham’s team, ultimately ending with the most incriminating version of the story that prosecutors deployed against Sussmann.

Bosworth noted that the account Gaynor gave during an October 2020 interview with Durham’s prosecutors led to them warning him that he was no longer merely a witness in their probe but was now a subject of the investigation–meaning that he could face criminal charges.

“I was in significant peril,” Gaynor said. “It is very concerning as a DOJ employee that now the Department of Justice is looking at you.”

Gaynor said he was told his status was “in jeopardy” after he said he didn’t recall any direction to other agents that they couldn’t contact the person who delivered the server allegations to the FBI.

Gaynor said that after his interview he re-read records related to the case and recalled that he had told others at the FBI about the “close hold” designation. Bosworth suggested that Gaynor changed his account to please prosecutors, but the agent said his recollections were refreshed by looking at his own notes.

Former FBI General Counsel James Baker testified last week that while he didn’t widely share the details of Sussmann’s role with others at the FBI he did tell Priestap, who wrote it down. Baker said he didn’t recall refusing to disclose the name to others at the FBI.

Heide and other agents in Chicago seeking to verify the claims asked if they could be told who provided the data and accompanying analytical white papers to the bureau.

“We really want to interview the source of this information. Any way we can track down who this guy is and how we’re getting this information?” Heide wrote to Gaynor in an Oct. 3, 2016, email.

Testifying for the prosecution, Gaynor said he felt that revealing the source wasn’t necessary at that point because agents were still trying to trace the alleged data links. He said they were ultimately determined to be spam email messages sent by a marketing server.

The FBI did reach out “discreetly” to a cybersecurity firm, Mandiant, and learned that company looked into the allegations and found them to be without merit, Gaynor said. However, he testified that the FBI avoided other steps like interviewing outside technology experts because they feared that doing so would lead to reports, just prior to the presidential election, that the FBI was investigating the issue.

“The decision was made that doing an overt interview so close to the election could inadvertently impact the election,” Gaynor said. “I believed that in a politically-charged environment that the ones and zeroes would answer the question of whether or not there was a national security threat.”

Gaynor said officials also had concerns that the FBI openly investigating might also discourage those who brought the matter to the FBI from going to the media.

“We’re not supposed to engage in overt activities that could be interpreted to be dissuading people from engaging in First Amendment-protected speech,” he said.

Defense attorney Michael Bosworth suggested that Gaynor’s memory had evolved over time, particularly about the central issue in the case: whether Sussmann said he was bringing the so-called secret server allegations forward independent of the Clinton campaign or the DNC. Gaynor said he remembers having the impression during another conversation at the FBI in 2016 that the server information came from a lawyer who worked for the DNC but said he was bringing forward the information on his own.

Bosworth said the records of Gaynor’s interviews by Durham’s team and of his grand jury testimony show Gaynor never mentioned that until he was in a meeting with prosecutors ten days ago.

“I don’t believe that came up in an interview,” Gaynor acknowledged.

Jurors also heard from a former FBI agent in Chicago, Allison Sands, who prepared a memo formally opening a counterintelligence investigation into the Alfa Bank server claims days after Sussmann brought them to Baker.

Under questioning by the prosecution, Sands said not knowing who the information came from or whether political partisans produced it may have led to the Bureau taking it more seriously than it should have.

“There wasn’t even an opportunity for us to even do a sanity check on: Does it make sense for us to use more time and engagement?” she said.

However, Sands said she’d only been on the job for a little more than three months when she was instructed by a supervisor to open the investigation in the case, which she was told had “headquarters interest.” As a result, the investigation was going to be opened regardless of what she thought and briefings on developments were conducted twice a day, she said.

“Especially as a new agent, this was my most important thing,” she said.

Sands also said both the opening and closing records for the investigation say the information came from the Department of Justice. That appears to be an error, perhaps garbling the fact that Sussmann was once a DOJ prosecutor.

Sands acknowledged that some cybersecurity agents within the FBI dismissed the alleged evidence from near the outset of the probe, with one saying in an instant message to her: “What a waste of time … but a fun exercise.”

As the trial entered its second week Monday, a dispute is also brewing over potential testimony by former New York Times reporter Eric Lichtblau. Witnesses have heard that the FBI sought to slow down a story Lichtblau was working on in the fall of 2016 about the alleged server links.

Sussmann’s defense wants to call Lichtblau and has waived confidentiality of any discussions Sussmann had with the journalist.

The defense has agreed not to delve into other matters, but Durham’s prosecutors are not party to that agreement and are arguing that they should be permitted to question Lichtblau about the full range of his reporting on the issue, including his interactions with other sources or experts such as a private investigation firm that looked into the subject for the Democrats, Fusion GPS.

“We think it’s fair game to probe Mr. Lichtblau on the exact substance of that,” Assistant Special Counsel Andrew DeFilippis told Judge Christopher Cooper before the jury was brought into the courtroom Monday. “These communications are highly probative.”

Lichtblau’s attorneys have argued that his testimony should be limited to his interactions with Sussmann.

Cooper signaled doubts Monday about whether prosecutors had done all they could to obtain such information or testimony without getting it from the reporter.

After DeFilippis noted that some of the people involved declined to speak with prosecutors, Cooper noted that the government could have forced them to do so by getting orders guaranteeing that their testimony wouldn’t be held against them.

“You could’ve immunized them,” the judge said.