New Mexico’s Democrats offer an energy lesson for the party 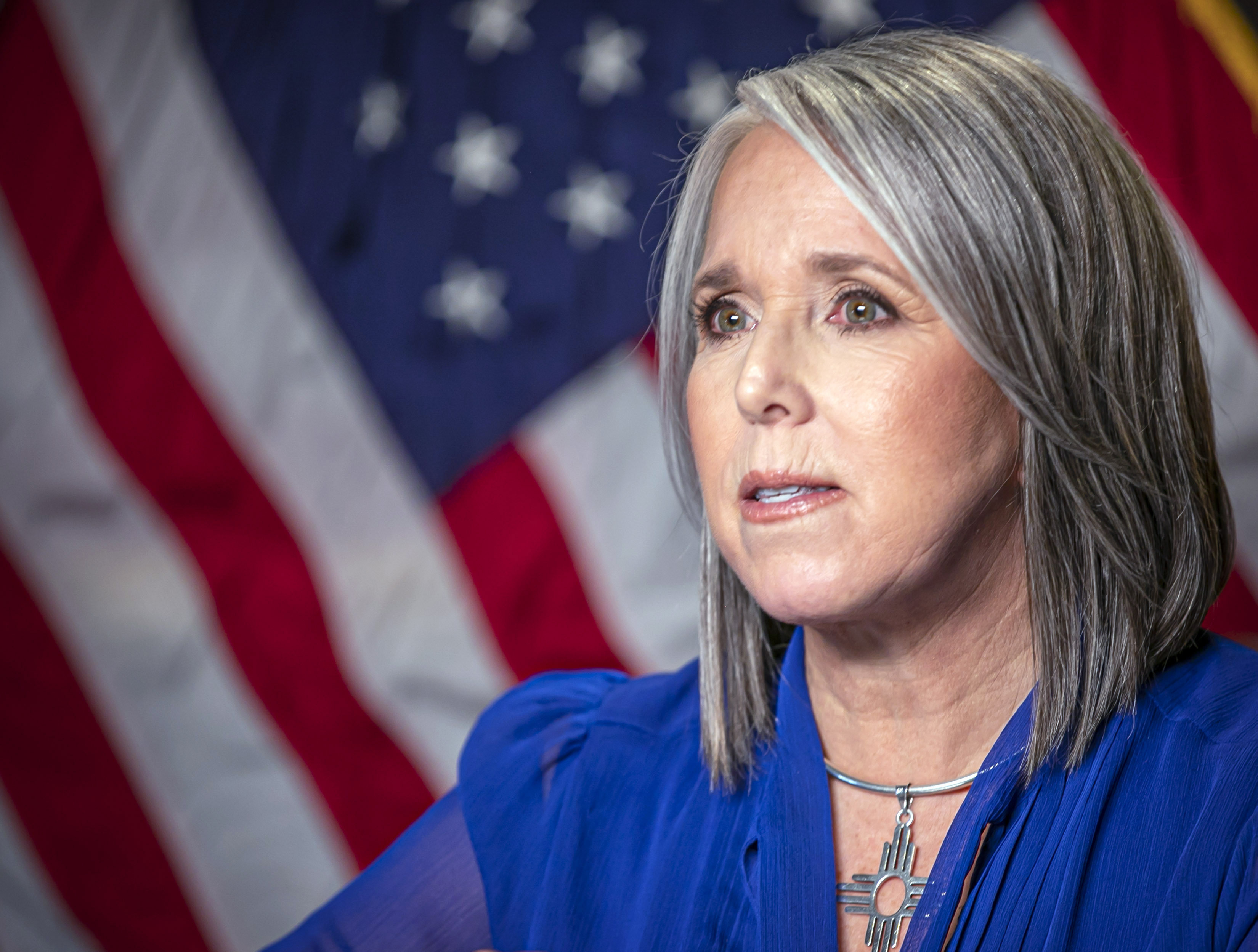 Democrats who hold power in one of largest oil-producing states in the U.S. have some advice for the Biden administration on how to craft a winning energy policy: Don’t pit renewables and fossil fuels against each other.

It’s a strategy Democrats in New Mexico have developed almost as a political necessity as they try to keep the state solidly blue even as it has quietly become the second-largest oil producer in the country behind GOP stronghold Texas.

That doesn’t mean New Mexico Democrats have shunned clean energy. The state has used its ample sunlight and windy landscape to triple its renewable energy since 2019, and it’s aiming to keep that momentum — but not at the expense of its prolific oil and gas fields.

President Joe Biden has adopted a similar tack this year as he’s cajoled the oil and gas industry to increase production to ease the high energy prices that are now the prime U.S. inflation drivers. And he’s stuck to his climate change message, saying that only a shift to clean energy will protect consumers from the perils of the global energy market and the rising temperatures caused by fossil fuels.

Democratic Gov. Michelle Lujan Grisham and the party’s lawmakers in the state won early raves from environmental groups for their support for renewable energy and climate policies, while the Democrats have at the same time acknowledged the oil industry’s outsize influence on their state budget.

New Mexico Republicans have been hobbled by intraparty squabbling over how closely to hew to former President Donald Trump and his America First message. The state’s Democrats, though, worry that national party stalwarts and environmental groups’ attacks on fossil fuels could alienate potential swing voters.

“Environmentalists can be out of touch that a typical person here in New Mexico is trying to put food on their table and thinking about how to pay their bills,” said Rubio. “When they hear a [call for an oil] ban, that means an end of the job. My effort as a legislator has been to find what the middle ground is.”

Stung by weak approval ratings and attacks by Republicans over his energy policies, Biden and Energy Secretary Jennifer Granholm have been making overtures to the oil industry as U.S. gasoline prices surged to an all-time high of $4.33 a gallon in March.

While the White House and Democrats still insist a transition away from fossil fuels is needed, New Mexican officials are urging the administration to avoid the sort of assertions that White House Climate Envoy John Kerry made last year that oil workers can simply leave their jobs for new ones at solar power companies. And they recommend putting some distance between the party and activists calling for an immediate end to fossil fuel production. 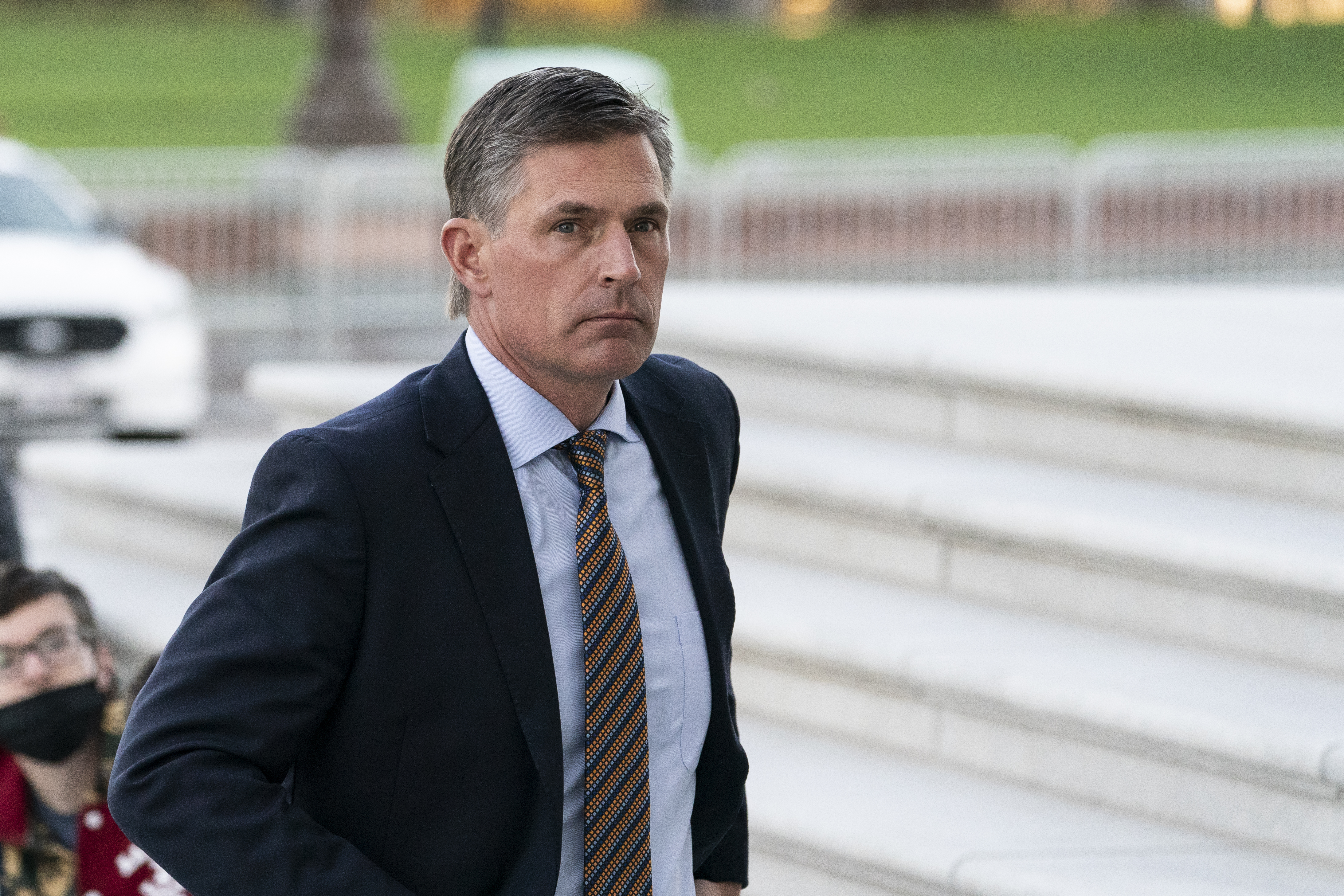 “John Kerry’s comment last year was just totally tone deaf,” New Mexico Sen. Martin Heinrich (D) said in an interview in his office. “Now, I love those jobs, but to be honest, those rooftop jobs, they’re not in my view a benefit because they’re going to replace a job for an [oil company] operating engineer. They’re not. But those are solid career paths for kids going to our local trade school in Albuquerque who want to do something physical with their hands. But just don’t promise those jobs to be something they’re not.”

National Democrats can look to the party’s success in the state in recent years as evidence that the strategy may be working. New Mexico has voted for Democratic presidential candidates in all but one race in the past 30 years, when George W. Bush won the state over Kerry in 2004 by less than a percentage point.

The state’s two senators, Heinrich and Sen. Ben Ray Luján, are Democrats. Former Rep. Deb Haaland, a progressive Democrat who grew up in a pueblo near Albuquerque, is now head of the Biden Interior Department in charge of greenlighting energy projects on federal land.

Rep. Teresa Leger Fernandez, also a progressive, replaced Haaland to join Democrat Rep. Melanie Stansbury in Congress. That leaves New Mexico with only one Republican in Congress, Rep. Yvette Herrell, who hails from the oil-rich southern part of the state.

New Mexico’s rise in oil prominence has largely escaped notice on the national stage and even within the state itself. The New Mexico Oil and Gas Association’s website still lists the state as the No. 3 producer, even though it overtook North Dakota in January 2021 to trail only Texas.

Fueled by wells in its northwest and along its southern border with Texas, New Mexico produced more than 1.3 million barrels of oil a day in January, nearly double the volume in 2018 and more than 10 percent of the total U.S. output.

Its renewable energy production, meanwhile, has also grown quickly. Solar and wind power capacity will reach nearly 1,300 megawatts this June, triple the amount in January 2019, according to the state land office. 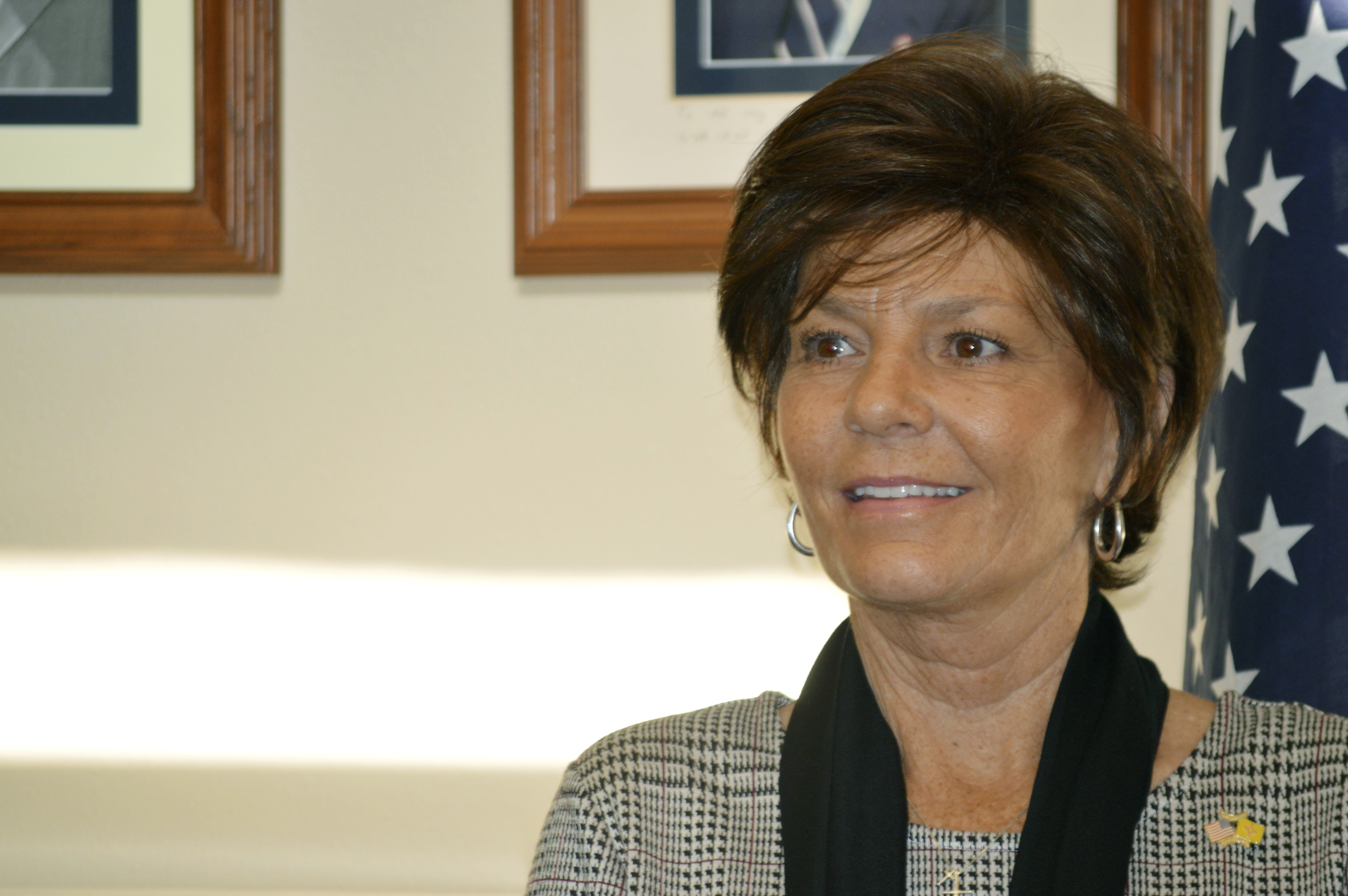 “It’s a very diverse place, but it’s a tale of two cities,” said Jake McCook, a political consultant who’s worked with state Democrats. “The north is very liberal and progressive. Then you have the south — mostly oil and gas country. Everyone there works for the industry. They have pretty good jobs, high paying jobs that these small rural communities need to thrive. There is definitely a fight between those two regions.”

Some environmental groups pushed back against criticism that focusing on ending fossil fuel production was politically counterproductive.

Collin Rees, a program manager for Oil Change International, a group that advocates ending oil production as soon as possible, said New Mexico hasn’t invested enough in renewable energy and remains too close to the oil and gas industry. The group’s advocates in the state were especially disappointed in Lujan Grisham’s recent backing of hydrogen technology, which critics say is likely to be made from natural gas, driving up dependence on the fuel.

“A state like New Mexico that has been treated like a resource colony, it needs to be in things like clean energy and not investing in continued fossil fuel development,” Rees said.

For New Mexico’s Democrats, though, the math is simple: More than a third of the state budget in recent years has come from royalties received from oil and gas production on state land. Money from oil production helped pushed New Mexico’s state budget to a record $8.5 billion for this fiscal year.

That means New Mexico’s political leaders are loath to directly attack the industry as hard as their Democratic counterparts in D.C., said Robert McEntyre, spokesperson for the New Mexico Oil and Gas Association.

“There’s a strong difference between how Santa Fe views the oil and gas industry here and how Washington sees it,” McEntyre said. “Lawmakers in Santa Fe have to craft the budget every single year. There is a difference in rhetoric and it’s growing more and more every year.”

State Republicans, however, still believe the Democrats don’t give fossil fuel companies enough support. Mark Ronchetti, a former television meteorologist and one of the Republicans hoping to run against Lujan Grisham in this year’s gubernatorial election, supports the growing renewable energy production, but says state Democrats are hypocritical for seeking to tighten regulations on methane pollution, since they rely on the royalties to pay the bills.

“You are seeing a rulemaking process from this governor where she constantly tries to make it more expensive and more difficult for the oil and gas industry,” Ronchetti said. “The governor of this state treats them like a necessary evil until it comes time to cash the check.”

Emissions of methane, a potent greenhouse gas, have surged in the state as the oil and gas industry expanded. The gas, which leaks from wells and other infrastructure, is also a target of the federal government, and reducing those emissions is seen as crucial to making near-term progress to slow climate change. 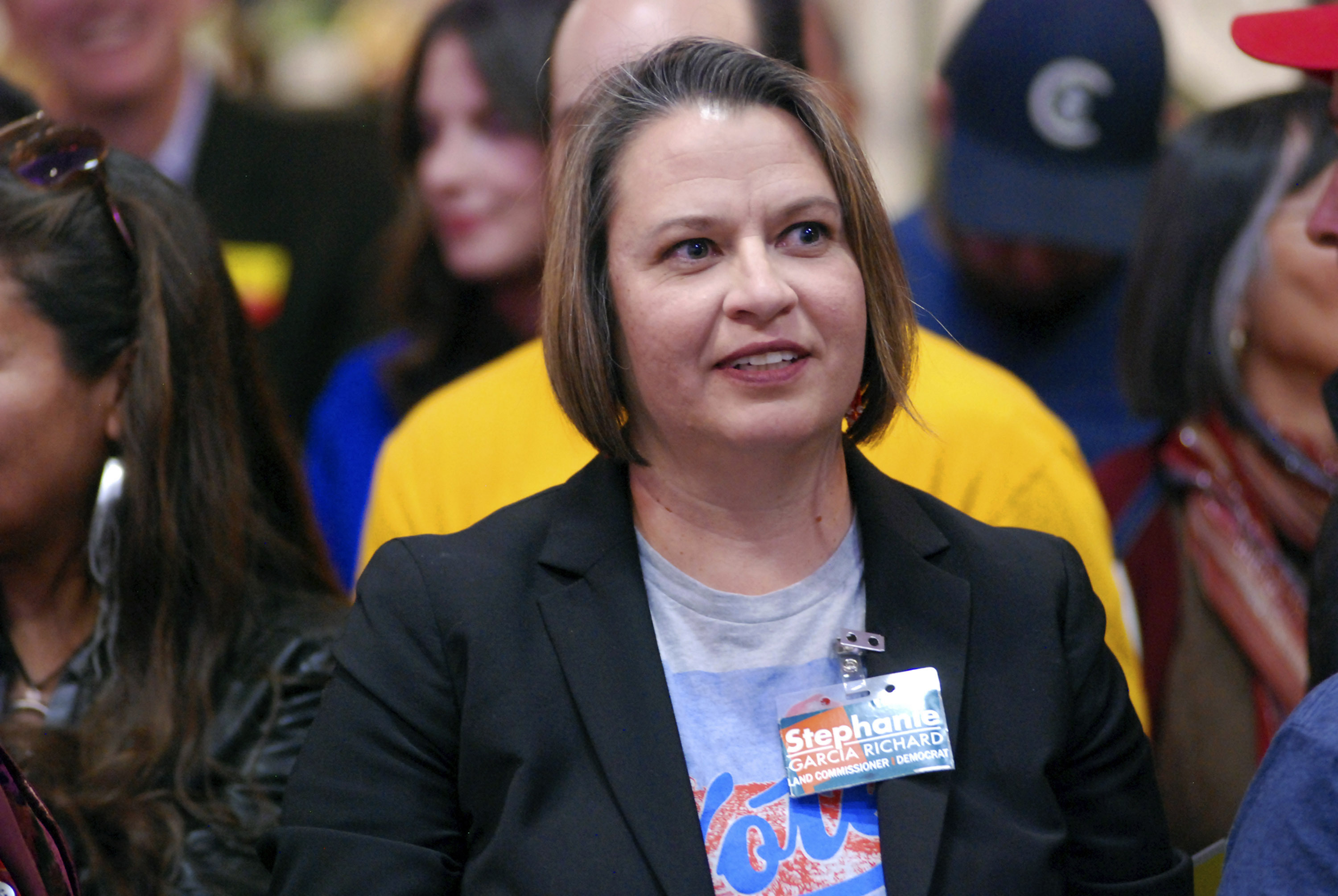 New Mexico Land Commissioner Stephanie Garcia Richard, who oversees the millions of acres of state land used for recreation, conservation and energy development, is well aware how the rise of renewable energy and greater pollution restrictions in an oil-rich state can create strange political bedfellows.

She plans to attend a ribbon-cutting for a new solar array on state land. The irony is that the project is backed by Chevron, the California-based oil company that, according to state campaign finance disclosures, contributed $2.3 million to New Mexico Strong, a Texas-based group that then spent nearly $2 million opposing Richards in her 2019 campaign for the job.

“We go from them dumping millions of dollars into the race against me to a ribbon-cutting, you know, holding hands at a solar array on their oil field,” Richard said.

Democrats are working to convince voters that policies to increase renewable energy production will over the long run help to lessen the state’s dependence on royalties from oil production to fill its budget, Richard said.

When oil prices are high, the budget is flush, Richard said. But when prices nosedive — as they did two years ago — it can devastate state finances. And when the oil wells inevitably start to go dry, New Mexico will need other sources of revenue, Richard added.

“Who says you can’t diversify while you’re still reliant on that funding source?” he said. “Let’s be real. It’s a finite resource.”

Tarin Nix, deputy land commissioner, was more blunt about how some national green groups may be reading the politics of pushing for more green energy.

“One of the biggest missteps that some of the left-leaning groups have made is tying renewables to oil and gas,” Nix said. “The only time we’ve ever got a pushback from this push for renewables is when people have tried to tie the commissioner to this argument that it will replace [fossil fuel jobs] one for one. It’s totally separate. They do not have to have anything to do with one another.”

Former Rep. Xochitl Torres Small (D), who lost her House seat to Herrell in the 2020 election, said it’s wrong for Democrats to suggest states and communities can count on replacing fossil fuels jobs with clean energy ones.

Now as under secretary for rural development in the Biden administration, Torres Small is pushing for the federal government to work with local officials to prepare economies to support other industries such as tourism, agriculture or manufacturing.

“When you think about the booms, you also think about the busts of the energy economy,” Torres Small said in an interview. “That’s why having multiple factors within an economy is crucial, so as there are challenges, the economy stays resilient because they have lots of different things going on in a community.”