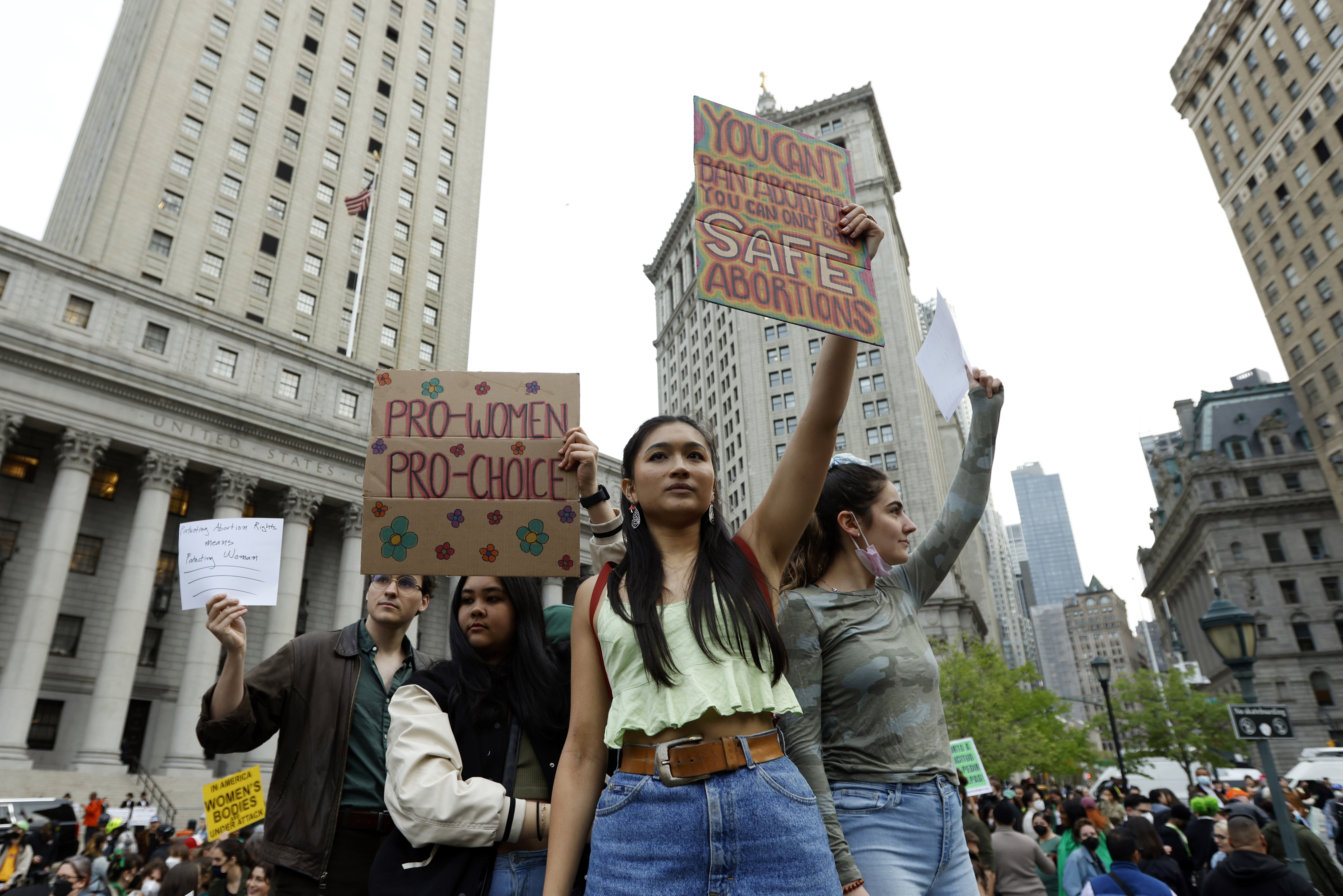 This week Americans learned that Roe v. Wade, almost certainly the most famous Supreme Court precedent and which recognized a constitutional right to abortion, was set to be overturned, leaving the question of abortion up to the states. In the immediate aftermath of the biggest breach in Supreme Court history, political pundits across the spectrum divided on the potential motive of any leaker. But there appeared to be near-universal agreement that this would have an enormous impact on the midterm elections.

Last year, I predicted that Republicans could experience a political backlash over abortion. Instead, Republicans saw near universal gains across the country. Why was I wrong? Because after 50 years of abortion politics sorting voters, maybe there is nobody left to lash back.

After the Supreme Court allowed the Texas “bounty hunting” abortion law to go into effect last summer, I wrote that “Republicans in Washington [were] being uncharacteristically quiet — at least in part because they sense[d] that this law will do more to motivate the opposition than it will to rally the faithful.” And at the same time, the Texas law “allowed Democrats to unite their warring factions on the Hill, moved the news cycle off wall-to-wall coverage of Biden’s botched Afghanistan withdrawal, and raised money for Democratic candidates” in advance of the 2021 gubernatorial elections in Virginia and New Jersey.

Then November happened. As predicted, the Democratic candidate, Terry McAuliffe, made abortion access a central focus of his campaign. Now a Republican is in the Virginia governor’s mansion for the first time since 2009. Governor Phil Murphy in New Jersey — a state that Joe Biden won by 16 points — sparred with his Republican opponent over Roe at debates and on the campaign trail. The race wasn’t able to be called on Election Night; Murphy eked out a win by barely 3 points.

Almost a year since the Texas law went into effect, politically speaking, abortion was the dog that didn’t bite.

At its most basic level, there are two ways a political issue can affect an election. Either it causes a meaningful number of voters to switch from one candidate to another or it increases turnout by motivating people disproportionately on one side of an issue to vote who otherwise would have stayed home.

On the first point, the question is whether there are any voters left who would change their votes based on the outcome of the Supreme Court’s decision in Dobbs. After decades of abortion litmus tests for candidates, what if the vast majority of voters already changed parties at some point to align with their beliefs on abortion or aligned their beliefs with their party’s increasingly firm ideological stand on the issue?

In the 50 years since Roe was decided, the two political parties have shifted to become almost synonymous with their positions on this singular issue.

At the 1972 Democratic Convention, 59 percent of delegates voted against an abortion-rights plank for the platform. Even as recently as 2009, 64 Democrats voted for an amendment to the Affordable Care Act restricting federal funding for abortions. In 2019, Kirsten Gillibrand campaigned on the idea that the Democratic Party should “be 100 percent pro-choice, and it should be non-negotiable.” As John Murdock wrote in National Affairs, Gillibrand “eventually left the presidential race not because her abortion absolutism was too radical but because it was too common.” Today, only two Democrats in the House identify as “pro-life” and the number may well be zero by 2023.

The Republican Party wasn’t always uniformly anti-abortion. As California governor, Reagan signed into law a liberal abortion bill. Future Vice President Nelson Rockefeller, writes Murdock, had “turned New York City into an abortion destination” as the first state in the country to legalize abortion without a residency requirement. George H.W. Bush’s father was the treasurer of Planned Parenthood, and Bush as a member of Congress “earned the nickname ‘Rubbers’ for his support for contraceptive access.” In the 90s, Republican Majority for Choice had chapters in nearly 20 states, an annual budget of a million dollars, and plenty of incumbents in both houses to support. Today, Lisa Murkowski and Susan Collins are the last two pro-abortion rights Republicans in the Senate. Republican Majority for Choice closed down in 2018.

The second issue is whether this could tighten the enthusiasm gap between Republicans and Democrats in the run-up to the midterm elections. The country saw some of the highest voter turnout in modern history in 2018 and 2020. Many believed — and not without good reason — that the high turnout was driven on both sides by Donald Trump. But in 2021, Virginia saw the highest percentage of voters in any gubernatorial election since 1997. Just last month, Texas held the first primary for 2022, breaking turnout records in the state. If voters are already highly engaged in the current political moment, then Dobbs could only help Democrats if they are able to find Americans who stayed home in 2018 — at the height of the Trump presidency — who are only now motivated to vote for a Senate candidate who campaigns, for example, on voting for a federal law to enshrine a right to abortion.

On the other hand, we do see data showing certain voting demographics within the Democratic base — young people, Latinos and Black voters — increasingly dissatisfied with President Biden, which is presumed to hurt Democratic turnout in down-ballot races in the fall. And while a reversal on Roe might motivate some younger voters, Democrats may be wary of campaigning on an issue that could further put off some Latino and Black Democratic voters, who are already more conservative than white Democrats on many social issues, including abortion.

At the same time, abortion has become less salient as a political issue. There are fewer abortions in the US than there were when Roe was decided in 1973 — at a time when abortion was illegal in the majority of states. Perhaps this explains why abortion has been steadily falling on the list of issues that voters mention as being the most important issue facing the country while other cultural issues — most notably, immigration — have ticked up. In fact, abortion didn’t even register at 1percent in any of the last four Gallup issue polls.

And that’s unlikely to change after this decision. A 2019 Guttmacher Institute study estimated that the total number of abortions would only decrease by 12.8 percent if Roe were overturned because many states already protect a right to an abortion at the state level.

The real political fight may be within the parties. Thanks to the Supreme Court, both Democrats and Republicans have been able to have their cake and eat it too when it comes to abortions, talking a big game but avoiding specifics on when abortions should be banned because Roe stood in the way of any real political accountability.

In the 2020 Democratic primaries, Elizabeth Warren refused to name “any limits on abortion” that she would support. But most Americans are unlikely to support elective abortions at 39 weeks. In the meantime, Republican state legislators have passed sloppily drafted laws that they knew wouldn’t go into effect under Roe, including laws that could criminalize the removal of an ectopic pregnancy — a tragic and common complication that will never result in a live birth and could kill the mother in the meantime.

Both parties are about to learn that legislative cosplay is all fun and games until the courts return the issue to voters and their elected representatives have to actually govern.

For the 20 or so states that don’t have laws already waiting in the wings if Roe is overturned, this decision will undoubtedly bring outsized political pressure to pass a law one way or the other. Many of those states — like Florida, South Carolina and Indiana — are controlled by Republicans. The rest — like Wisconsin, Pennsylvania, Arizona, New Hampshire and North Carolina — have mixed party control at the state level or in statewide office. And all of those states have competitive Senate elections this year. Those are the states where we would expect abortion to have its greatest political impact. But after the results in New Jersey and Virginia last year, we all may need to rethink whether abortion is the wedge issue it used to be.