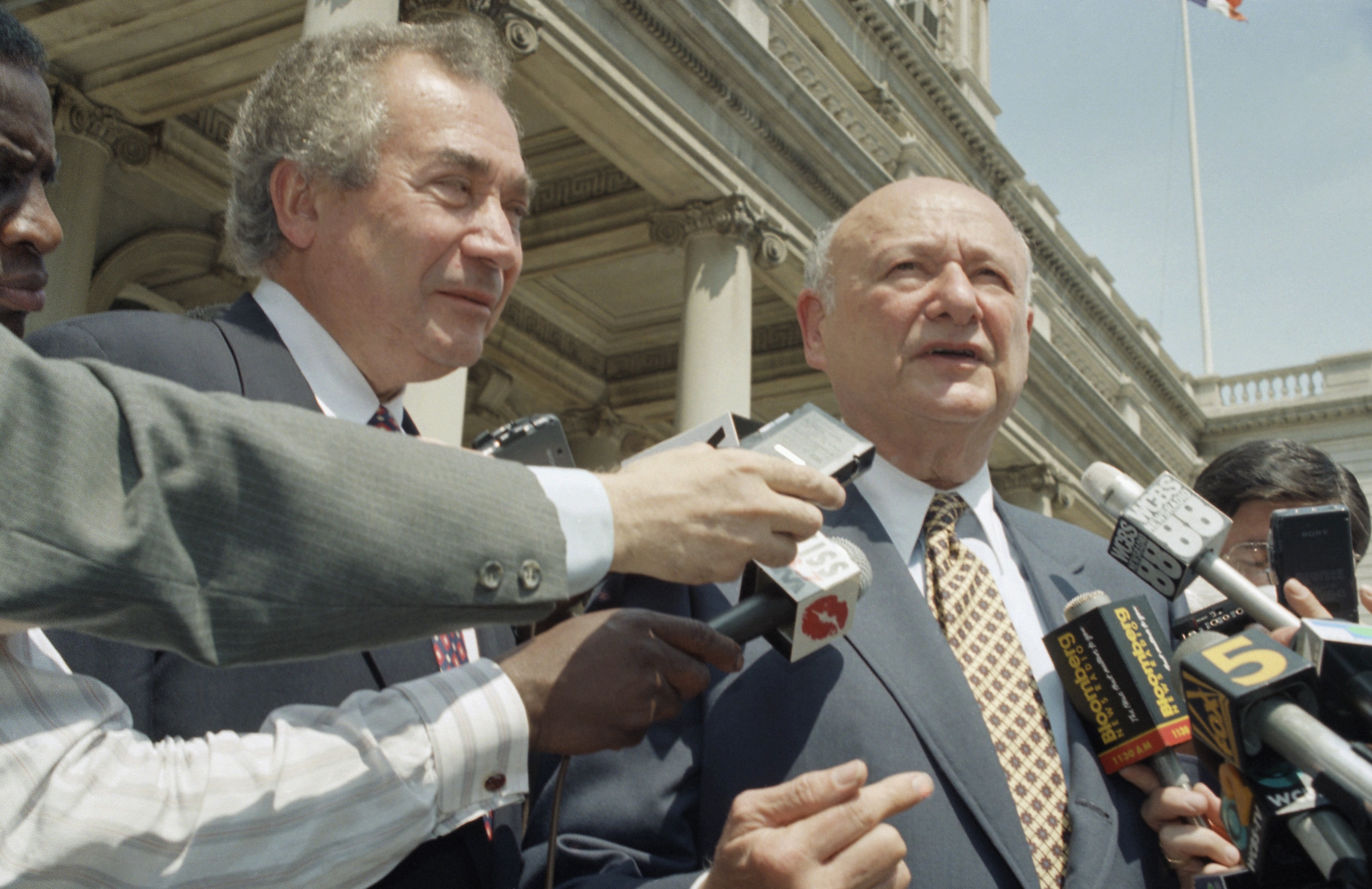 Almost every American institution and branch of government stands guilty of mistreating gay people. Not until December 1973 did the American Psychiatric Association vote to remove homosexuality from its psychiatric disorder category (the APA still recoiled from calling it “normal”). Not until July 1975 did the federal government lift the blanket work-ban on gay men and lesbians. Not until August 1995 could gay men and lesbians qualify for national security clearances. Not until July 2003 were laws against sodomy invalidated in the United States. And that’s just for starters.

Enlightenment came slowly and has still not arrived in some places, so it makes sense that Ed Koch concealed and publicly denied his homosexuality until his death in 2013. The personal life of Koch, who served in Congress and then was mayor of New York City between 1969 and 1989, got Page One treatment in the Sunday New York Times. In a sympathetic and thorough fashion, it portrays him as a man who feared that sharing the basic facts of his life would destroy his political ambitions. Koch was so conflicted and anguished by his identity, the Times reports, that he once spontaneously volunteered at a mayoral staff meeting, “I am not a homosexual.” Nobody had asked.

The Times piece talks to Koch’s friends, colleagues and a surviving family member about his secret life. Whenever the subject of his orientation came up, staffers would lie to cover for him. After his political career ended, Koch remained haunted by his failure to find a partner. “With other gay people, he seemed completely comfortable as a gay man,” Charles Kaiser, a friend of Koch’s, told the paper.

The main thing the feature misses — and this could have been covered in a paragraph or two — is any reflection on the role the Times played in sculpting the culture that punished the gay and lesbian community. This is not a knock against the contemporary Times, which can’t be blamed for how the Times of the past reported on gay men and lesbians in the 1960s. Nor is it a call for journalistic reparations. Presentism is an easy game to play. Besides, today’s Timespeople have already acknowledged their predecessors‘ failings. But if Koch quivered in the closet for his whole life, it’s worth reviewing the paper’s back pages to fully understand his dread.

“Almost every New York City newspaper reference to lesbians and gay men in the fifties was connected to a crime,” Charles Kaiser writes in his essential book from 1997, The Gay Metropolis. The Times held particular sway then as now. “It was the bible of the eastern liberal establishment, the media outlet that set the tone for the coverage of every important story in America. Its news judgment was considered unimpeachable by all other serious newspapers and every network news broadcast,” Kaiser continues.

The paper’s earlier hostility toward gay people was captured in this Page One story, published in 1960 when Koch would have turned 36. Reporter Milton Bracker went on for feature-length about the deterioration of the 42 Street/Times Square neighborhood, a mere block from Times headquarters, sketching “a portrait that was half police blotter and half Dante’s Inferno,” Glenn Frankel writes in his 2021 book, Shooting Midnight Cowboy: Art, Sex, Loneliness, Liberation, and the Making of a Dark Classic.

“Homosexuality is an obvious problem on Forty-second Street,” read one of Bracker’s paragraphs. “Homosexual males converge in the area and are most prevalent at the Eighth Avenue end of the block. The clergy, the police, merchants and business organizations generally agree that homosexuality has increased in the area over a period of several years.”

But what was the problem? Arrests for “homosexual offenses,” which the paper defined as loitering in “any public place soliciting men for the purpose of committing a crime against nature or other lewdness.” But in conveying the moral panic over the “homosexual problem,” Bracker confessed that there was no reliable way to identify who was and who wasn’t gay on 42nd Street. “One was a Negro who wore fluffed up hair and heavy black make-up on his brows and lashes,” he wrote. Another “was a white youth with thick blond hair and handsome features who wore make-up on his eyebrows” and “tapered black trousers of the style known as ‘continentals.’” But Bracker doesn’t confirm his suspicions that the men are gay, only observes their fashion sense.

In 1961, an arts section piece fretted about the abundance of gay artists in the New York theater and arts worlds. “It is time to speak openly and candidly of the increasing incidence and influence of homosexuality on New York’s stage—and, indeed, in the other arts as well,” Howard Taubman wrote. But the Times’ covert apprehensions about homosexuality turned overt in this 1963 article by Robert C. Doty, “Growth of Overt Homosexuality In City Provokes Wide Concern.”

“The city’s most sensitive open secret — the presence of what is probably the greatest homosexual population in the world and its increasing openness —has become the subject of growing concern of psychiatrists, religious leaders, and the police,” Doty wrote, and New Yorker Koch presumably read.

“On one side was the ‘organized homophile movement — a minority of militant homosexuals that is openly agitating for removal of legal, social, and cultural discriminations against sexual inverts.’ This group argued that gay people should be treated like any other minority group because homosexuality was ‘an incurable, congenital disorder’ — although the Times report insisted ‘this is disputed by the bulk of scientific evidence.’ On the other side was the psychiatric community, which was pressing for ‘an end to what it calls a head-in-sand approach to homosexuality.’ This group cited ‘overwhelming evidence’ that homosexuals were not born but created — generally and inadvertently by emotionally ill-adjusted parents. Fortunately, a cure was at hand: ‘sophisticated analytical and therapeutic techniques.’”

In 1964, when Johnson administration aide Walter Jenkins was busted at a downtown Washington YMCA for “disorderly conduct” with another man, the Times editorialized, “There can be no place on the White House staff or in the upper echelons of government for a person of markedly deviant behavior.” But the paper’s editorial page rethought its stance a year later, as it gently editorialized in favor of a New York state law that would have decriminalized homosexual acts conducted in private. The tide turned harder in 1967, when the paper’s magazine published a feature about gay rights, in 1969, when the paper allowed the publication of a first-person arts essay arguing (pseudonymously) against the fictional trope of homosexual as sociopath, and harder still in 1971, when it published author Merle Miller’s breakthrough essay, “What It Means to Be a Homosexual.”

A.M. Rosenthal, who was as much a creation of his time as Koch was, became the paper’s top editor in 1969 and did not surrender that perch until 1986. In his tenure, he acquired an indelible reputation for being anti-gay and for infusing the Times’ pages with his animus. Kaiser writes, “gay employees were treated just as capriciously as gay issues at the New York Times” during the Rosenthal era. (See this scabrous Rosenthal piece by Michelangelo Signorile, originally published in 1992.) According to Kaiser, there were only two out newsroom employees in the entire United States until 1980, and neither of them worked at the Times. The paper didn’t start on its gay-friendly path until Arthur Sulzberger Jr., a member of the family that controls the Times, began to exert his influence on the paper in the early 1980s as he traveled the stations of the cross at the paper to prepare for his installation as publisher in 1992. Sulzberger met with every Times reporter who he learned was gay, Kaiser writes, and assured them that their sexual orientation would not block the trajectory of their Times careers.

The Times finally caught up with the times in 1987, after Rosenthal left. The word “gay” was finally approved for use “as an adjective meaning homosexual.” Timesperson David W. Dunlap covers that watershed in his 2017 Times piece.

It would be a reach to conclude that the Times bears primary responsibility for Koch’s closeted life. It would be presumptuous to insist, without living inside his skin, that Koch should have come out during his lifetime, as much good that would have done other people. Barney Frank, the first member of Congress to voluntarily come out, didn’t do it until 1987 when he was 47. And again, it would be insolent to knock only the Times for Koch’s decision. The paper is powerful, but it’s not all-powerful.

But still, Koch didn’t make his decision in a vacuum. Born, raised and educated in New York, the New York Times created the atmosphere he breathed every day of his life. Usually, a story suffers when it indulges in self-mention. In this go-round, a few sentences explaining how the Times helped shape Koch would have improved the piece.

Send scabrous reading suggestions to Shafer.Politico@gmail.com. No new email alert subscriptions are being honored at this time. My Twitter feed would like you to buy Kaiser and Frankel’s books. My RSS feed believes in the right to loiter.