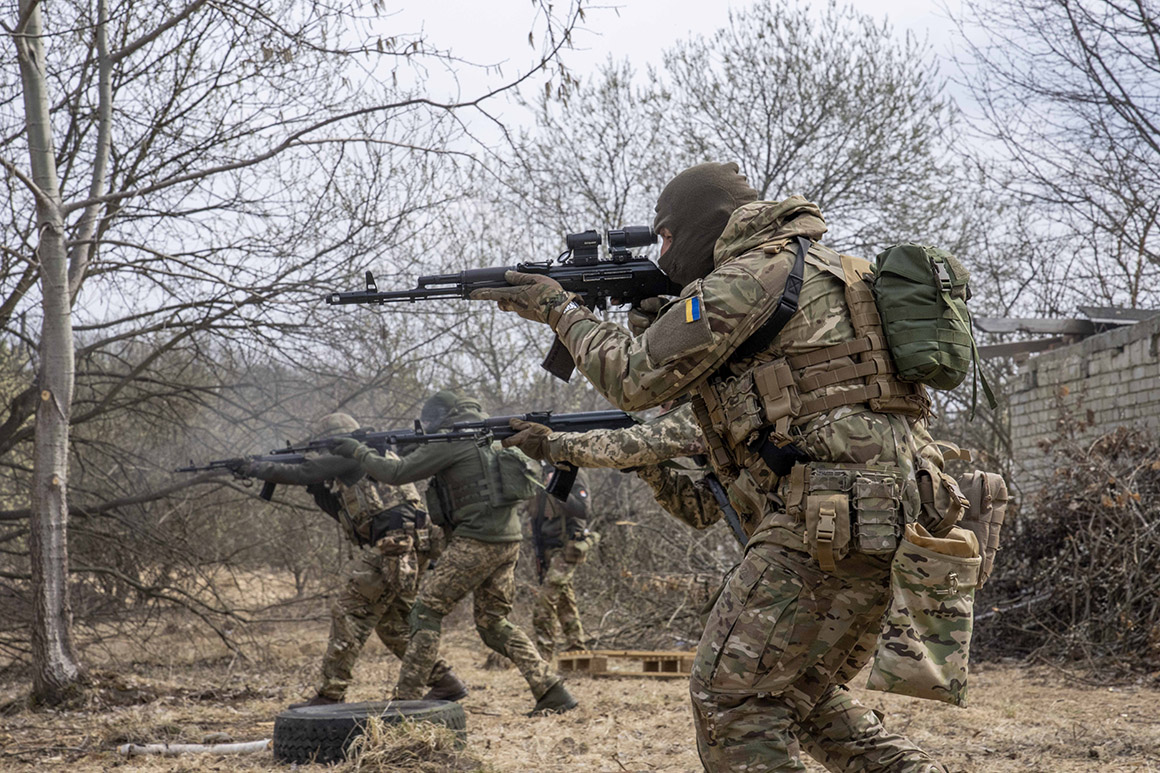 Russia is making good on promises to attack U.S. and allied weapons shipment points and fuel depots in Ukraine, launching rockets at five railway facilities used to funnel critical supplies into the country on Monday.

The attacks across western and central Ukraine targeting supply lines and infrastructure come as billions worth of heavy artillery systems, tanks and armored vehicles begin arriving to help Ukraine face off against what is expected to be a full-scale Russian assault in Donbas.

On Monday, the U.S. secretaries of State and Defense huddled with top Ukrainian officials in Kyiv, where they pledged hundreds of millions more in military aid for the coming fight.

“We want to see Russia weakened to the degree that it can’t do the kinds of things that it has done in invading Ukraine,” Defense Secretary Lloyd Austin told reporters in Poland Monday. “It had already lost a lot of military capability and a lot of its troops, quite frankly, and we want to see them not have the capability to very quickly reproduce that capability.” 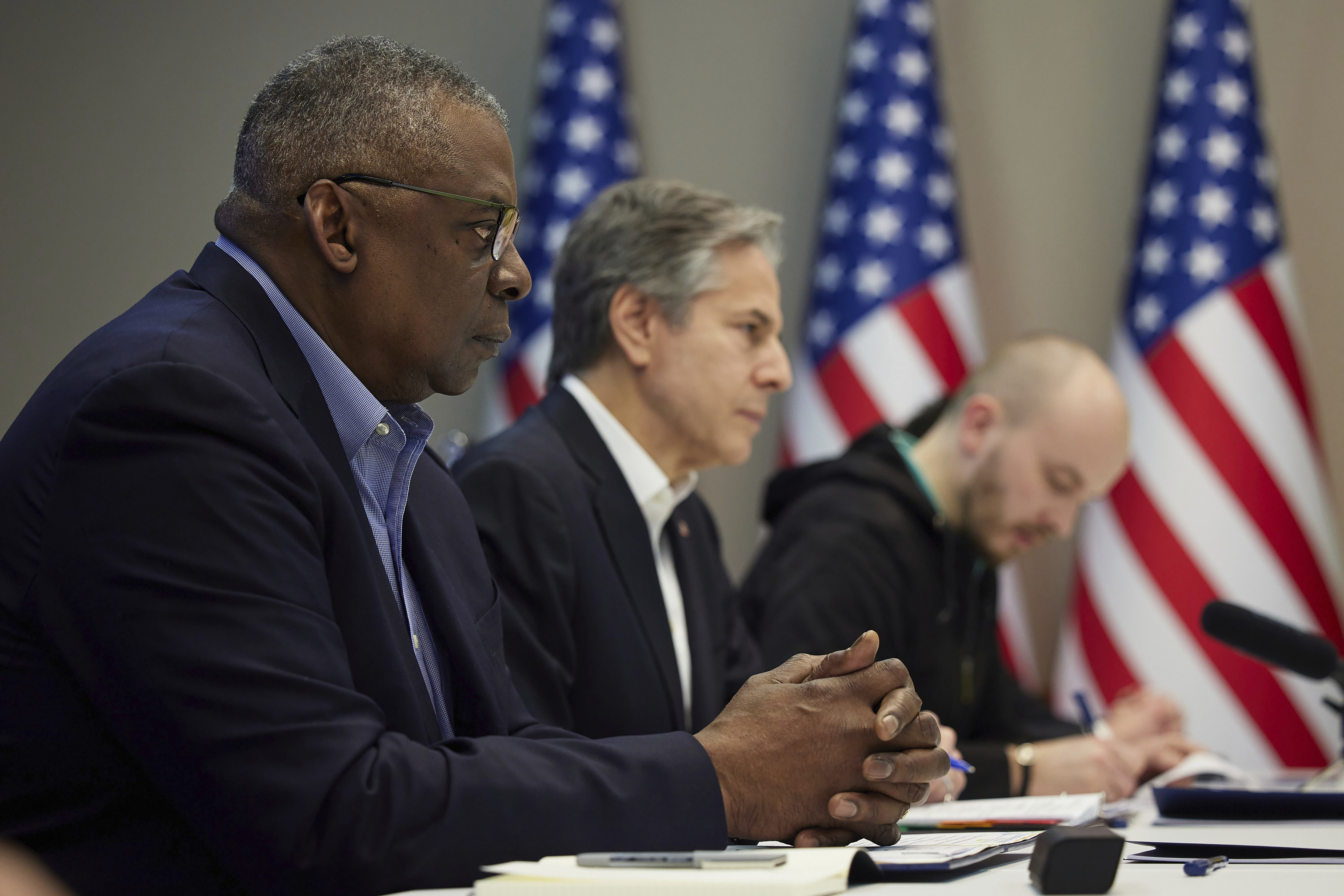 Over the past two weeks, the Pentagon has picked up the pace of its deliveries to the battlefield, rushing in more than $1 billion worth of heavy weaponry and other aid by sea and by air. On Thursday, President Joe Biden approved another $800 million weapons package, including 72 155mm howitzers. By Saturday, those howitzers were already showing up in the country, Austin said Monday.

“That is unimaginable speed,” he said.

Since August 2021, DoD has given Ukraine enough artillery to equip five battalions for potential use in the Donbas, Pentagon press secretary John Kirby said last week. The U.S. military has also begun training several dozen Ukrainian fighters on the new equipment outside of Ukraine, he said.

But in this new phase of the conflict, protecting critical supply lines will be key, experts and former officials say.

“The fight for Donbas will be won or lost primarily on logistics: weapons, equipment and ammunition,” said Mick Mulroy, a former top Pentagon official and retired CIA paramilitary officer and Marine. “There have to be uninterrupted supply lines from the U.S. and NATO.”

Those supply lines have been threatened by Russia since it invaded Ukraine on Feb. 24, but until now Moscow hasn’t explicitly acknowledged it acted on these warnings.

Both Russia and Ukraine are rushing to marshal resources and materiel in the Donbas region in Ukraine’s east, and western officials are pushing their governments to provide additional aid to Kyiv for the coming fight.

Ukraine is taking in “a lot of new Western new equipment, maybe more than the Russians have been capable of moving into the country themselves, so the imbalance in equipment that we saw in the early phases of the war is starting to equalize,” said Dmitry Gorenburg, a Russia specialist at nonprofit research institute CNA. But moving tanks and large artillery pieces over the Polish border without attracting Russian attention is more complex than moving truckloads of smaller Javelin and Stinger missiles, which dominated the donations in the early days of the war.

Striking those new, larger shipments, if they come by both rail and road, could prove difficult for Russia over the long run, however. Russia’s pilots remain wary of testing Ukraine’s air defenses and the Kremlin will likely need to start conserving some of its long-range precision weapons.

“[Russia’s] stockpiles aren’t necessarily large” when it comes to weapons such as Kalibr and Iskander precision missiles, Gorenburg said. “They are using them up, and they don’t want to use them all because that would weaken their ability to fight NATO” in the near future.

And so far, Russia has not been effective at disrupting the supply lines, primarily because its military is “not very good at dynamic targeting” — in other words, hitting a moving object rather than a stationary target such as a building, Mulroy said.

The fighting in the coming days and weeks will likely be different from the small-unit clashes seen in the opening weeks of the war, when Ukrainian anti-armor munitions blunted Russian attacks around the capital of Kyiv in close-in urban fighting.

The war in Donbas has already seen longer-range artillery engagements, and the 90 howitzers supplied by the U.S., alongside newly arrived Canadian howitzers and French Caesar mobile 155mm cannon systems on the way will give Ukrainian forces the ability to match — if not outdistance — Russia’s long-range capabilities.

Adding to the inflow of armor, Polish Prime Minister Mateusz Morawiecki confirmed Monday that his country had sent T-72 tanks to Ukraine, following the lead of the Czech Republic, which has sent its own Soviet-era tanks in recent weeks.

While the Russian long-range strikes into western Ukraine are expanding the zone of conflict, Ukrainian helicopters last month also conducted a risky operation into Russia, targeting an oil depot over the border in Belgorod. On Sunday night, several explosions rocked two oil facilities, one commercial and one military, in the Russian city of Bryansk close to the Ukrainian border. Those explosions came after a string of unexplained fires at Russian military research facilities over the past week.

As the fight for Donbas gathers strength, British intelligence assesses that Russia has made minor advances in Ukraine’s east in recent days, and “without sufficient logistical and combat support enablers in place, Russia has yet to achieve a significant breakthrough” U.K. defense attaché Mick Smeath said in a statement Monday.

Since the conflict began, Russia has lost about 15,000 personnel, over 2,000 armored vehicles, and more than 60 helicopters and fighter jets, according to U.K. Ministry of Defence estimates, Wallace said. Over 25 percent of the battalion tactical groups Russian committed to the fight have been “rendered not combat effective,” he added.

“Russia has so far failed in nearly every one of its objectives,” Wallace said. “These next three weeks are key.”