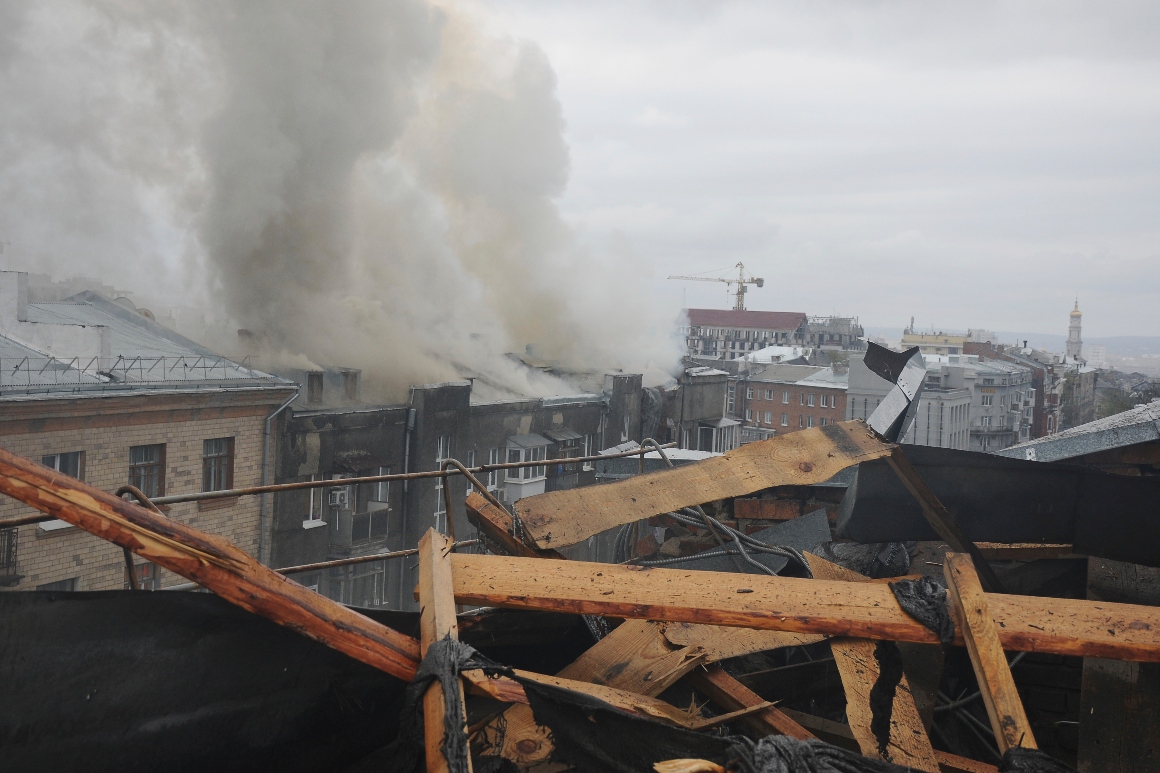 Russian forces unleashed a massive artillery and rocket barrage all along Ukraine’s eastern front Monday night in what Ukrainian officials say is the start of a new offensive stretching from Kharkiv in the north to Mariupol in the south.

As streams of rocket artillery hit Kharkiv and Mykolaiv, Ukrainian President Volodymyr Zelenskyy delivered a video message saying, “Russian forces have started the battle for the Donbas that they have been getting ready for a long time.”

Head of the National Security and Defense Council Oleksiy Danilov added that “an active phase of the Russian offensive set off almost along the entire front line,” signaling what most expect to be a bloody new phase of the seven-week-old war.

The assault comes about two weeks after Russia rapidly repositioned tens of thousands of troops who had been mired in the Kremlin’s failed northern offensives around the capital of Kyiv where they were repeatedly blunted by Ukrainian resistance.

In those northern fights, Russia lost thousands of troops and hundreds of tanks and vehicles to anti-armor weapons rushed into the country by the U.S. and its Western allies, a feat that officials in Kyiv hope to repeat in the east.

But that Western help for what is expected to be a different war in Donbas has just begun to arrive, and has not always met the expectations of the Ukrainian leadership.

Officials in Kyiv have long called for fighter planes and more air defense systems made up of both the older Soviet systems they already use, as well as new NATO weapons that can knock down Russian missiles and fighter planes with more accuracy.

The Biden administration announced a new package including 18 howitzer cannons and 40,000 rounds of ammunition last week, and American trainers will show Ukrainian forces how to use them, a senior defense official told reporters at the Pentagon Monday. The comments mark a reversal from previous U.S. reluctance to announce contacts between U.S. and Ukrainian troops.

Other weapons, including British anti-ship missiles, tanks from Eastern European countries and armored vehicles from as far away as Australia, are being prepped to be rushed to the fight following a recent donors conference held by the British government. A Slovakian official confirmed to POLITICO that Bratislava remains in talks to sell Ukraine up to 16 self-propelled Zuzana 155mm howitzers, which have a range of about 25 miles. The longer range would be a huge boost when facing off against Russian systems that are pounding Ukrainian cities and military positions from afar.

The Czech Republic has also reportedly delivered up to 20 RM-70 multiple rocket launchers to Ukraine, a system that can lob rockets up to 12 miles and are derived from the older Soviet BM-21 Grad launchers already in Ukrainian stockpiles.

On Monday, Ukrainian Col. Yurii Andriychuk pleaded on Twitter for the Swedish-made NASAMS (Norwegian Advanced Surface-to-Air Missile System) as missile stocks for the Soviet-era BUK systems wind down. The medium-range air defense NASAMS is operated by the United States, Lithuania, the Netherlands, Poland, Spain and others.

The massive strikes Monday night came after American intelligence observed Russians moving heavy artillery in and around Donbas, the defense official said, where “it appears as if they are trying to learn from the failed lessons of the north where they didn’t have proper sustainment capabilities.” Because of the geography in that part of Ukraine, where flat farmland provides miles of visibility, the U.S. believes “there will be a reliance on armored capabilities and artillery,” the official said.

In something of a surprise move, the Russians appear to have launched this offensive before fully seizing the city of Mariupol in the south, where Ukrainian marines have been resisting a much larger Russian force.

The Russian attempt to take Mariupol is keeping 12 battalion tactical groups tied down in street-to-street fighting, making them unable to operate elsewhere along the already stretched Russian front.

The Ukrainian defenders have largely retreated — along with thousands of civilians — to the sprawling Azovstal steel plant while refusing demands to surrender. Videos on Monday showed large sections of the factory complex smoldering from Russian air and artillery strikes.

The fight for the city has slowed Russian advances elsewhere, U.K. defense attaché Mick Smeath said in a statement Monday. Russia’s scorched-earth tactics, including the targeting of populated areas, “aligns with Russia’s approach to Chechnya in 1999 and Syria in 2016,” he said. “This is despite the 24 February 2022 claims of Russia’s Defence Ministry that Russia would neither strike cities nor threaten the Ukrainian population.”

Russia still has over 70 battalion tactical groups in eastern Ukraine, many reinforced from units pulled from the failed northern offensives. Those troops are being bolstered by new artillery capabilities sent from bases in Russia.

The new fight may have just started, but Ukrainian forces have been battling Russian-backed separatist troops in Donbas for eight years, giving the Ukrainians’ familiarity over the terrain. But the war, which Russian officials clearly thought would last only a few days, has become an existential struggle not only for Ukraine, but also for Russian President Vladimir Putin, whose economy is being strangled by Western sanctions.

As a result, the renewed fighting in Donbas will be bigger, more violent and more desperate than the grinding war of attrition seen since 2014.

The Russian offensive “is likely going to look kind of like the fight in the Donbas has looked for the last eight years, except on steroids,” said Dave Johnson, a senior researcher at RAND who focuses on armored warfare. “The question is: Can the Ukrainians survive that? It’s an open question, quite frankly.”