The Man Behind the Account that Blew Up Capitol Hill 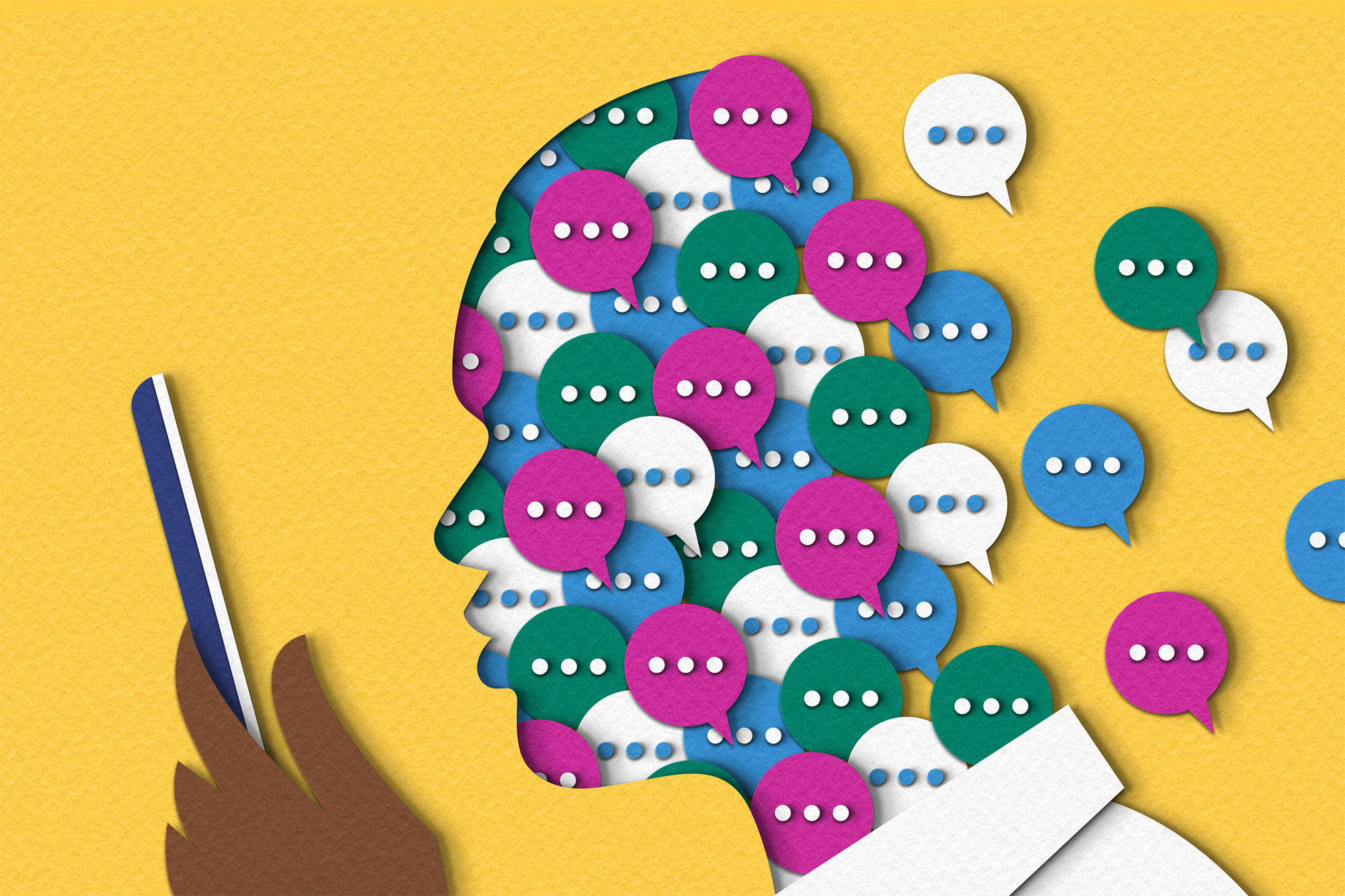 The posts appear late at night or early in the morning, a tranche of Instagram stories relating workplace harassment, discrimination and the terrible bosses who serve on Capitol Hill. The first-person testimonials and shreds of gossip published on @dear_white_staffers are secrets entrusted to the DMs of one man. He lives in Washington and works on the Hill. By the time his 85,700 followers see the new posts of the day, he has read hundreds of messages from strangers, screenshotting and cropping each one to preserve the sender’s anonymity.

On @dear_white_staffers, requests come in for “vibe checks” on various members of Congress. The vibe check is understood to be all-encompassing. It means how’s the pay? What’s the reputation of the office? How does the member of Congress treat their staffers, their interns, their drivers? Is it kindly and fairly? Or is it poorly? Once an ask is made, the crowd-sourced replies roll in via DM, and the man’s daily ritual begins again: Read, screenshot, crop, save, re-share.

The result is a rapid-fire tour of Capitol Hill, bouncing between subjects and extremes:

“You have to be a masochist to work for this office…”

“Nicest person ever. Super courteous and always makes it a point to say good morning/good evening… Grade A human…”

“Abusive and uses people’s past traumas to bully them. Wouldn’t recommend unless you want to end up with a shrink…”

“He’s not mean, he’s just awkward, curt, and expects a lot of his staff…”

The Instagram account exploded in popularity early this year, breaking the code of silence around workplace conditions in politics, particularly for people of color. The unverified posts, built on current and former political aides sharing what they know and hear, have helped drive a union movement on Capitol Hill and cowed legislators who historically operate with impunity.

“Anon pls,” the messages begin, though by now the promise of anonymity is implicit. The owner of @dear_white_staffers has kept himself a secret, too. As a rule, the man clears out his camera roll every day. He’s turned off Instagram notifications on his phone. He’s never told his friends, or his coworkers about the account. The only person in the man’s life who knows is his partner.

In a place like Capitol Hill, with the long hours and slanted power dynamics, with the fear of being blackballed or hurting a party or politician’s cause, the workplace culture incentivizes silence over speaking up, even for those trying to shock the place into change. The man would like to tell you who he is. But he knows it would harm his career. Operating the account, the man told me — it’s a bit like the Matrix. “You get plugged in and you’re doing this other thing. You plug out and you’re living this other life,” he said. “It would be nice to talk to others about it.”

For someone who receives hundreds of messages a day — 100 to 150 if it’s “very slow,” 300 to 400 if it’s busy — the man is responsive. When I reached out to ask if he’d be willing to speak to me, he double-tapped the message, leaving a red heart to let me know he’d seen it. When I followed up, he said he’d been taking time to think about the idea and would let me know.

Eventually he did. And by the time I dialed the phone number he provided in a message from the @dear_white_staffers account, he seemed nervous but relieved to finally be talking.

“This will probably be my first and last interview,” he said.

The man shared his name and employment details with me, but to protect his identity, we won’t be printing them here. Over the last three months, he said, people have tried to access the account by resetting his password. Others have reported the page to Instagram in an effort to shut it down. 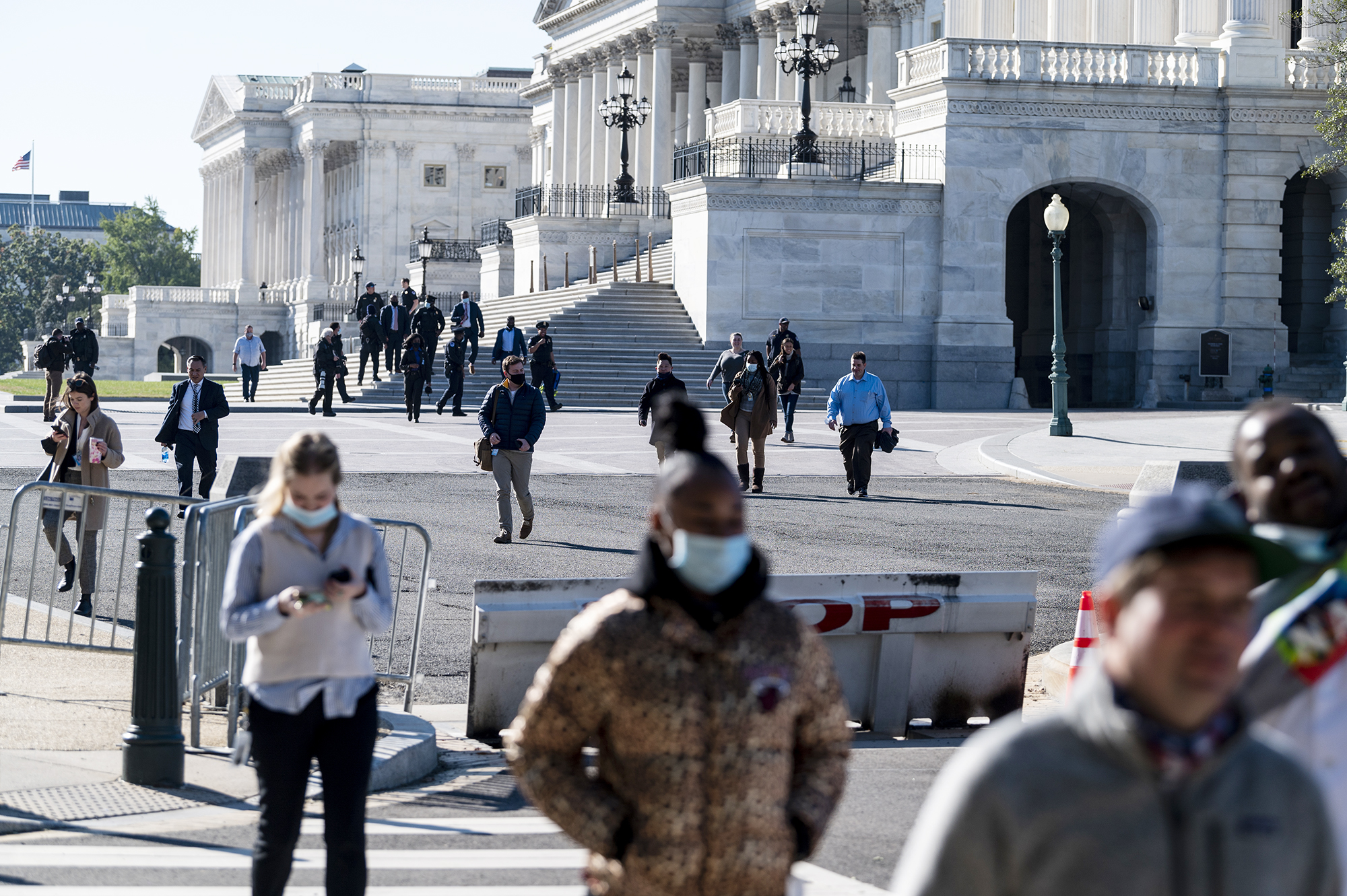 For reporters, stories about bad bosses are hard to do. The keeper of @dear_white_staffers enjoys the freedom of anonymity, but also the lack of accountability it carries. He hopes the page encourages Hill staffers to talk to journalists. He’s even tried to connect interested reporters with the people who message him. But he knows the platform affords space for stories that will never be substantiated, or make it to the press. The database Legistorm tracks high staff turnover in the Senate and the House — a list they speculatively call “Worst Bosses?” on their website — and it may be the most reliable public indicator available to journalists. When I ask what members of Congress show up most on @dear_white_staffers, the man names many of the same lawmakers on Legistorm’s list.

Staffers inside multiple congressional offices, where the man still goes to work every weekday, have sent him warnings via DM: Their bosses, they say, are closely watching what happens on the account. Using a list of members’ personal email accounts, the man said, he’s identified several burner accounts he believes belong to members of Congress.

He remembers the day when someone asked for a thread about House Speaker Nancy Pelosi, the most important woman in Washington. The account had reached a level of power that frightened him.

“I had heard from staffers in [Pelosi’s] office saying, ‘Oh, people are talking about this. Our chief of staff is calling everyone about it.’”

When the man first posted on Jan. 30, 2020, he wanted to create a basic meme account. There were others like it on Capitol — @congressional_scheduler, @tired_press_secretary — but he didn’t see them riff on the experiences of people like him. As a person of color on the Hill, the man has been mistaken for a valet driver at events with his boss. He’s been treated by Capitol Police differently than white colleagues. He’s had coworkers make uneducated remarks.

“Just being a staffer of color, you start to rack up a bunch of life experiences working here,” he said. “I felt like there was a void that needed to be filled.” 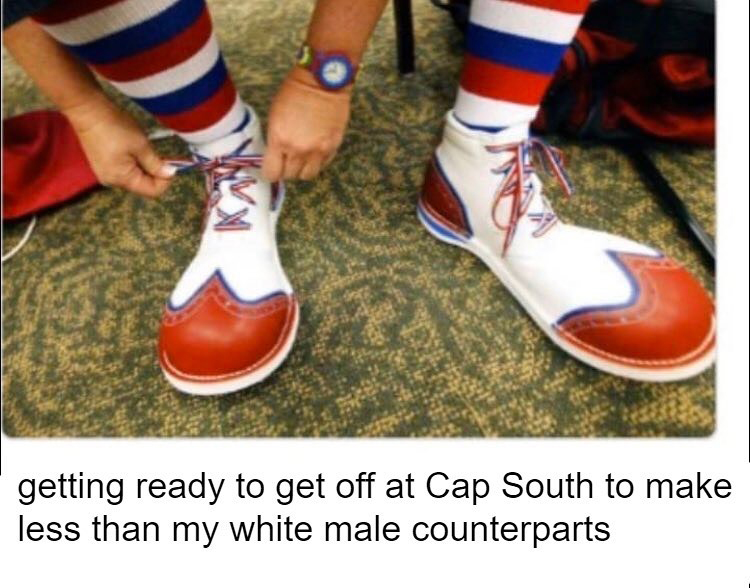 The handle he chose is a reference to “Dear White People,” the movie and adapted Netflix series following Black students at a fictional Ivy League university. His first post shows a picture of someone putting on a pair of oversized clown shoes. The caption reads, “getting ready to get off at Cap South to make less than my white male counterparts.” Thirty-three people liked it.

The man kept up the memes for two years until the page shifted into something new. It was a Friday night in the middle of January when he got a DM asking to “get a thread going of horror stories driving your member of Congress around.” He reposted the request to an Instagram story and wondered if anyone would respond. “And then all of a sudden I was flooded,” he said.

Right away, he had the instinct to share the responses.

“People were a little hesitant — like, ‘This is anonymous, right? Crop my name out.’” Within weeks, the account grew to 8,000 followers. “Part of the growth was an exercise in building trust between the account and the Hill staffer community,” he said. “That’s the ingredient to the success of the account.”

By the end of January, the mission of @dear_white_staffers was clear in the man’s mind. It wouldn’t just be a place to vent. It was a collective platform, he said. “It does feel like a hive mind now,” he said. “It feels like it belongs to all of us. So we can collectively respond to issues going on in the capital, troubleshoot some questions, talk about pay raises together.”

The community grew to 20,000 after Jan. 31, when another anonymous Instagram page, @deuxmoi, famous for its crowd-sourced community of celebrity watchers, asked its followers what “goss” they were talking about with friends. “Political gossip,” one user replied. “The account @dear_white_staffers is exposing D.C. a la Deux Moi.” The message was reposted to @deuxmoi’s 1 million-plus followers. The two Instagram pages use similar formatting — an endless stream of re-shared anonymous DMs — though the man said he had never heard of @deuxmoi until that day in January.

Less than a week later, the man got a DM from Pablo Manríquez, a reporter for Latino Rebels. The @dear_white_staffers page had been sharing stories about Hill aides on food stamps, and a new effort to organize a union. Manríquez said he wanted to ask Pelosi about it at her next press conference. “I honestly didn’t think anything of it, because I’m like, ‘There’s no way he’s gonna get a question,’” the man said. “I told him he should ask about staff pay and unionizing.” 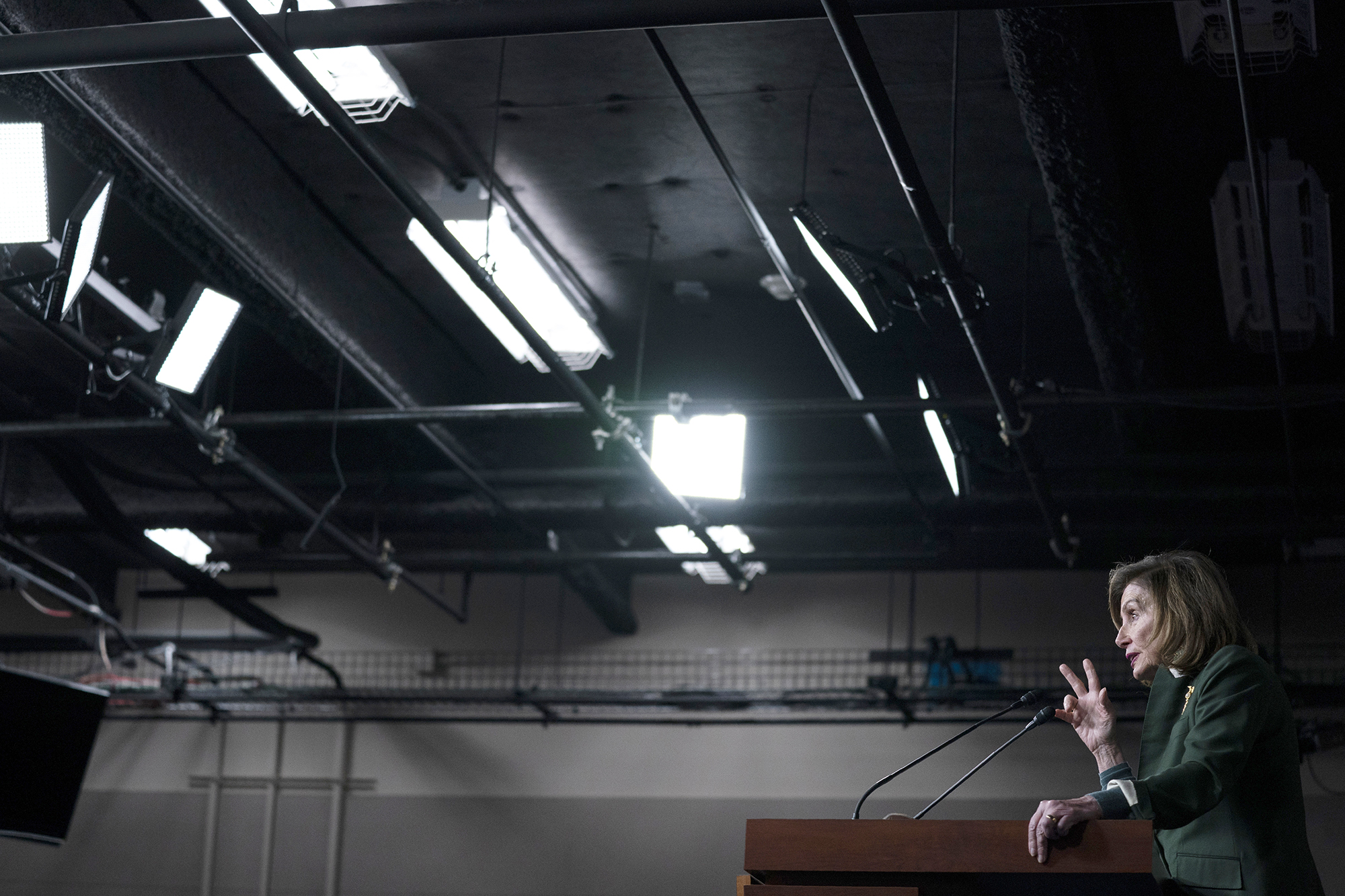 On the day of the press conference, the man was working in his office. C-SPAN was on low volume on a TV nearby. But it wasn’t until he checked his Instagram, where dozens of new messages were suddenly coming in, that he realized Manríquez had asked the question.

That day, Pelosi came out in favor of a congressional union.

“It’s one of those things where it’s hard to keep bottled in,” the man said. “Like, I can’t believe I’m experiencing this right now and I can’t tell my coworkers or my friends. That was very difficult.”

There have been times, of course, when he’s come close to making a mistake.

“I’ll be standing in line at Dunkin’ Donuts and forget that I’ll have my @dear_white_staffers Instagram account up and I’ll quickly switch to my personal account. Or I’ll be looking for a photo and I’ll accidentally scroll through a cropped Instagram DM that I forgot to delete. So there are close calls, kind of all the time. I try to be careful and watch my surroundings.”

On the other end of the gossip, there are some horrific stories, and these can be difficult to read. He carries them around, in his phone, on his person. “Some of the worst things I’ve ever read — physical abuse, mental abuse, stories of suicidal ideation,” he told me. “I would be lying if I said it didn’t take a toll. There are days where it’s very draining.” 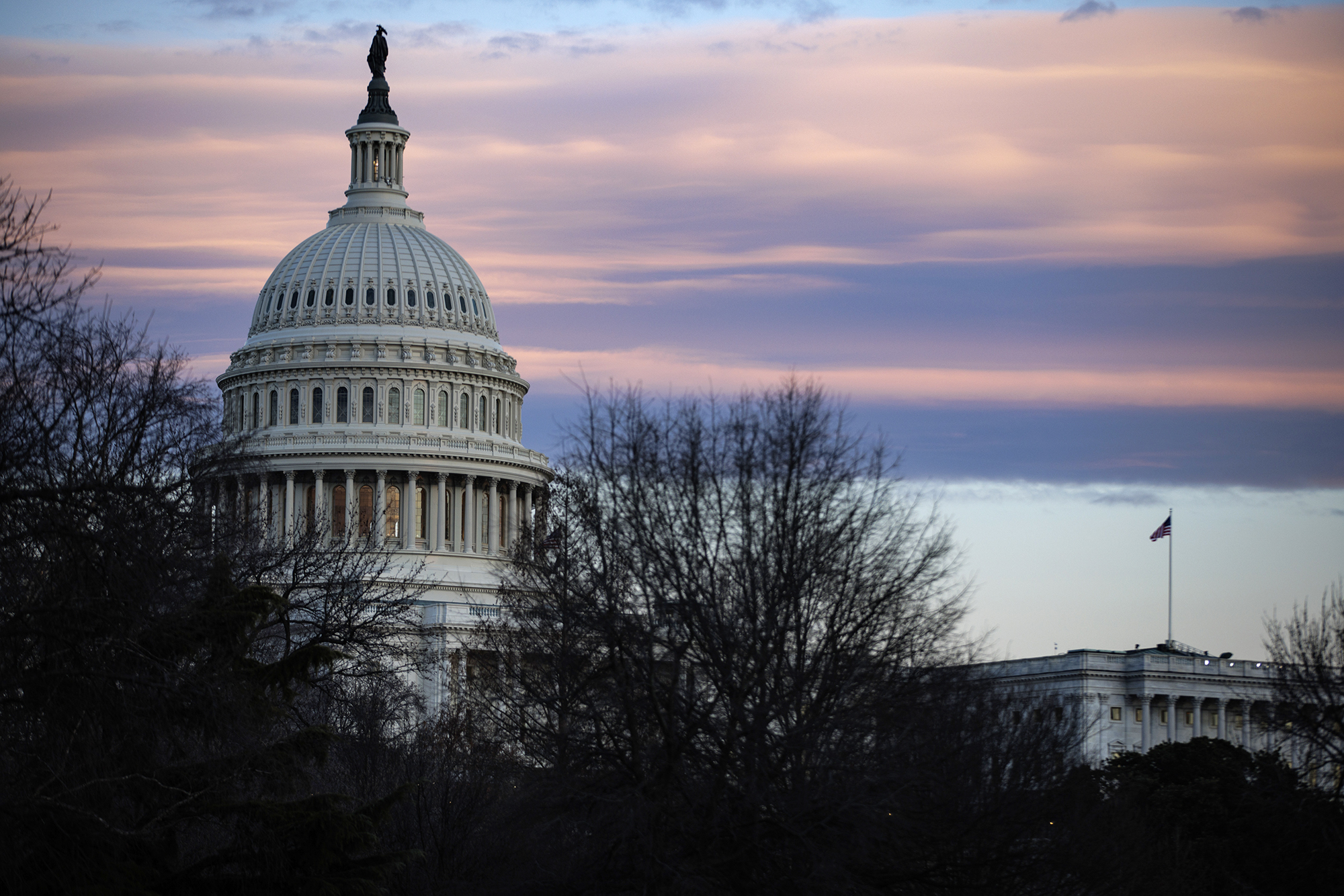 Since the days of the Pelosi press conference, the incoming DMs have slowed a little, but he still sets aside an hour or two each night to read through new messages. In between memes of Will Smith and the rabid fox that stalked Capitol Hill this month, there are posts about how to support laid-off cafeteria workers and advocate for staff salary raises. New vibe checks are archived at the top of the page. “Are you the only Black woman in your office? Sound off,” he asked this week.

He doesn’t see himself quitting soon, if only because of the goals he has in mind: He wants to see the union become a reality. He wants Hill aides to start thinking of themselves as “workers” in the tradition of the labor movement, deserving of fair treatment and good wages.

And eventually, the man would like to put his name to this story. “It would be great to be public one day,” he said. “But I don’t know what those conditions would look like.”

It will depend on what change comes to Capitol Hill.