Trump goes all in for candidate accused of sexual assault 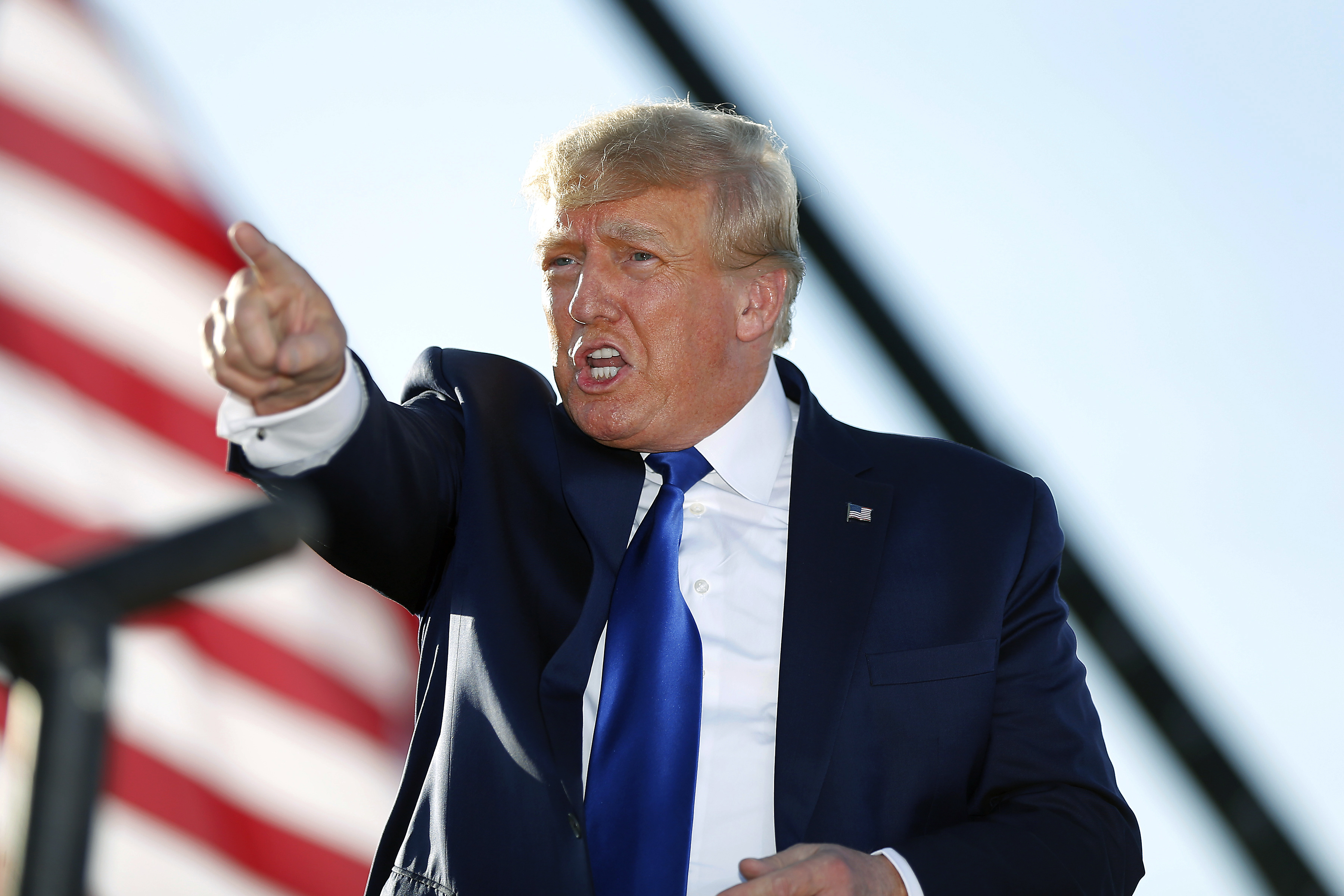 Former President Donald Trump’s aides earlier this month told him about explosive allegations: That Charles Herbster, his endorsed candidate in the Nebraska governor’s race and a longtime top donor and ally, had sexually assaulted eight women.

But Trump did not withdraw his support for Herbster, or scrap plans to hold a Friday evening rally for the candidate in Nebraska. Instead, he doubled down: The former president relayed word that Herbster wasn’t fighting back hard enough, backing plans for Herbster to hold a press conference aggressively denying the allegations and pushing back at his adversaries.

Herbster followed suit, blasting the allegations as a “smear campaign” taken from the same “playbook” used to target Trump and Supreme Court justices Clarence Thomas and Brett Kavanaugh, when they faced accusations of sexual misconduct. And Herbster, a multimillionaire agricultural executive who owes his fortune in part to selling bull semen, boasted to reporters that he had brought on a law firm used by Trump to defend himself.

Trump’s unflinching support of Herbster, who served on a Trump White House agricultural panel and has known the former president since 2005, starkly illustrates the all-encompassing emphasis the former president places on loyalty. When Trump associates have faced allegations of misconduct, the question of what they did has often taken a back seat to how close they’ve been to Trump — who has then offered allies everything from pardons to campaign support in their time of need.

But this time, Trump’s involvement is especially loaded with political risk for the former president, who is famously obsessed with his win-loss record in GOP primaries. Nebraska Republicans say that despite Trump’s early involvement, the race for the Republican nomination on May 10 is a three-way dead heat between Herbster and two other candidates, multimillionaire hog farmer Jim Pillen and state Sen. Brett Lindstrom.

One measure of Trump’s devotion to Herbster: He is the only local candidate Trump is expected to voice support for at the Friday event, unlike many past Trump rallies, which he has used to boost multiple contenders. Those in Trump’s orbit point out that, in contrast to many other states, the former president has few close allies in Nebraska’s statewide offices or congressional delegation, and he has not endorsed any other candidates in the state.

“He is a man of his word. When he says something, he has delivered, in all the years that I’ve known him,” Herbster said in an interview. “It’s easy to be someone’s friend and be around someone when something’s perfect. But when something is imperfect, many people … flee, and he’s not that type of person.”

Matt Schlapp, a high-profile Trump ally who has endorsed Herbster, and Mike Lindell, the pillow businessman and election conspiracy theorist, are among those also slated to speak at the rally, which is being held at a NASCAR racetrack halfway between Lincoln and Omaha.

Despite that support, Herbster is facing aggressive opposition from the state’s term-limited Republican governor, Pete Ricketts, who has spent the last year savaging Herbster as unfit for office. Even after Trump’s October endorsement of Herbster, Ricketts refused to stand down: The governor and his father, billionaire TD Ameritrade founder Joe Ricketts, have contributed a combined $600,000 to an outside group that has been airing slashing anti-Herbster TV ads.

Pete Ricketts, who is co-chair of the powerful Republican Governors Association and whose family owns the Chicago Cubs, has also been appearing in TV ads being run by Pillen, whom he has endorsed. Ricketts, whose antipathy toward Herbster dates back nearly a decade, also donated $100,000 directly to Pillen’s campaign, and earlier this year flew around the state with the candidate to announce his support. He is expected to make additional joint appearances with Pillen before the primary.

The 67-year-old Herbster, meanwhile, has denied the allegations against him, which have become a late focal point in the race. While a new POLITICO/Morning Consult national poll showed that Democrats are more likely than Republicans to call accusations of sexual misconduct against a candidate a “major problem,” 66 percent of Republicans did say that would be a “major problem for that candidate to earn your support.”

One of the women accusing Herbster, state Sen. Julie Slama, said that during a Republican Party function in 2019, Herbster reached up her skirt without her consent. The Nebraska Examiner, the political website which broke the story, also quoted a witness to the incident who confirmed Slama’s account.

During his press conference, Herbster said he was later invited to Slama’s wedding in the Dominican Republic and that she solicited a contribution from him, asserting that “those don’t seem to be the normal responses of someone who has done something very, very wrong to them.”

Herbster has filed a defamation lawsuit against Slama. And his campaign has accused Ricketts of helping to orchestrate the allegations, running a TV advertisement noting that the state senator once worked for the governor.

Ricketts pushed back in an interview, saying that it’s “ridiculous to think that somebody could coordinate eight different people to talk to a reporter about this.”

Trump has taken an interest in the race, aides say, venting about the governor’s intense push to defeat his ally. The former president has privately called Ricketts a “stiff,” has said he views the governor’s ongoing involvement as a personal slight against him and has complained Ricketts has “never done anything for me,” said one person familiar with the remarks. (The Ricketts family initially spent heavily to prevent Trump from winning the Republican nomination in 2016, though since then the Rickettses have donated millions of dollars to support him.)

Ricketts, who last year unsuccessfully tried to persuade Trump to not endorse Herbster, shrugged off the split.

“President Trump and I have worked together on a lot of different issues, and we agree on a lot of policy,” the governor said in an interview. “On this topic, we disagree on the primary. We’re backing two different candidates,” added Ricketts, who was not invited to attend the rally.

Herbster is hardly the first under-siege loyalist to whom Trump has given backup. During the final days of his presidency, Trump pardoned two of his former top political advisers, Roger Stone and Paul Manafort. After White House aide Rob Porter was fired following accusations of battering two of his ex-wives, Trump remarked that Porter had said he was “innocent” and added that he “did a very good job when he was in the White House.”

After former Fox News host Bill O’Reilly was accused of sexual harassment, Trump called O’Reilly a “good person” and said he didn’t think he “did anything wrong.” And after Trump’s Supreme Court nominee, Brett Kavanaugh, was accused of sexual assault during his high school years, Trump called him “one of the finest human beings you will ever have the privilege of knowing or meeting.”

Those close to the former president — who himself has been accused of sexual misconduct by more than two dozen women — say he often takes a skeptical view of accusations of impropriety directed at candidates he supports, believing that once he endorses someone, they become targets of unsubstantiated allegations. Trump has privately said he doubts the accusations confronting Herbster.

“I’ve been through thick and thin with Donald Trump and he’s always had my back,” said Michael Caputo, who was a top spokesperson at the Department of Health and Human Services during the Trump administration but later stepped down following revelations that he had made inflammatory social media postings.

Herbster is a consummate Trump ally. He was there at the beginning of the Trump era, when the then-candidate came down the Trump Tower escalator, and at the end, at the rally that preceded the deadly 2021 Capitol riot. In between, Herbster was a prolific donor to the former president, contributing more than $1.1 million to pro-Trump groups during the 2020 campaign. He was also present at the 2016 debate in St. Louis between Trump and Hillary Clinton, just after the release of the “Access Hollywood” tape, which showed Trump speaking in sexually graphic terms about women.

As the race enters its final days, Nebraska Republicans say the major outstanding question is whether Trump’s decision to venture into Nebraska on a Friday night puts his friend over the top in a race that’s essentially tied. Herbster has had Trump’s endorsement in hand for months, but there is recent evidence that Trump’s support can pay dividends for candidates down the stretch: After the former president endorsed “Hillbilly Elegy” author and venture capitalist J.D. Vance in the Ohio GOP Senate primary, the candidate’s poll numbers skyrocketed.

“No one, no one out there in the Republican Party,” Herbster said, “has ever or can now generate excitement [and] enthusiasm like Donald J. Trump.”